It’s not every day that a chef mentioned in the same breath as Joí«l Robuchon, Thomas Keller, Heston Blumenthal, and Alain Ducasse comes to Vancouver. So when Massimo Bottura flew in from Italy to cook for two nights last weekend at Cibo Trattoria, these would be no ordinary dinners.

The news release said that Bottura has been named the “Best Chef in the World” by International Academy of Gastronomy Surfing around that website, I couldn’t find this direct translation, but I did confirm that Bottura won the Gran Prix de l’Art de la Cuisine award, which is given every year to a “great contemporary master”. In past years it’s been awarded to the above-named celebrated chefs. Bottura owns Osteria Francescana, in Modena, which lies in northern Italy near Bologna. The restaurant is currently ranked as number four on the San Pellegrino list of the best 50 restaurants in the world and has been awarded two Michelin stars.

So why did Bottura come to Vancouver? Cibo’s director of operations, David Fert, called him up and asked him to. (Fert had worked with Bottura previously at an event in Switzerland.) Bottura accepts these kinds of global invites from time to time, and he’d never been to Vancouver.

Of course, bringing over a chef of Bottura’s renown can’t come cheap. Tickets for each of the two evenings ran $500 per person for a six-course meal accompanied by wines imported from Italy by Cru Wine. The price tag didn’t faze some Vancouverites, because the restaurant was sold out both nights.

I was lucky enough to have a seat at the media table as a guest of the restaurant. Bottura is known for his avant-garde cooking, but I wasn’t really sure what to expect. I had just returned from vacation in Emilia Romagna, the Italian region from where he hails, so I had already experienced its amazing culinary heritage and products, such as prosciutto di Parma and balsamic vinegar. But Bottura works culinary tradition like a piece of origami paper: when he’s done, each dish is so innovative that it’s something you’re never going to find in any Italian trattoria.

So how was the dinner? In short, extremely interesting. It was like nothing I’ve ever experienced before. Each dish had such a developed concept and back story, and such concentrated, distilled flavours, that it was truly art. Here’s the menu. 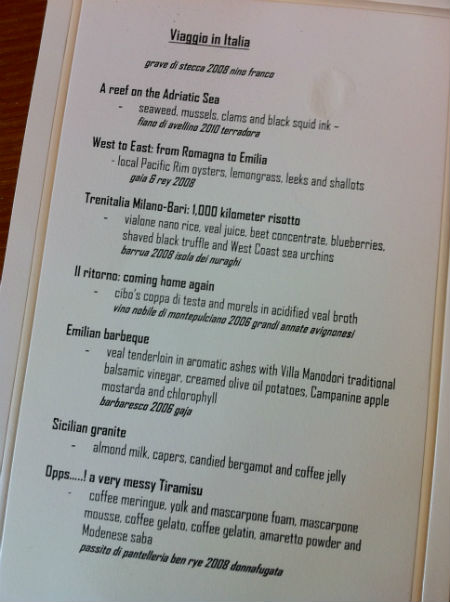 As an example of the creativity, the “barbecued” veal tenderloin never saw a barbecue or a flame: it was an ode to a barbecue, coated in ash to create the black char and cooked sous vide. The ash smudged into the sauce when you touched it. The creamed potatoes, made just with top-quality olive oil, no butter or cream, were stunning. 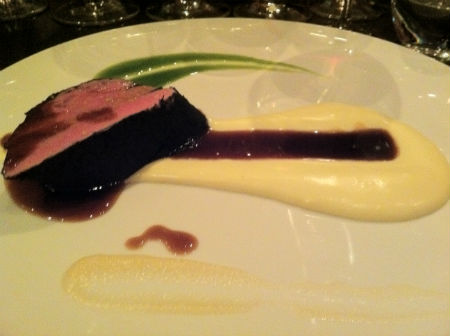 The first course, entitled “A reef on the Adriatic Sea”, was made of seaweed, mussels, clams, and black squid ink. With a texture like a grainy bread pudding, each bite gave off a blast of flavour that evoked the sea air perfectly: it was a salty, briny, essence of shellfish. 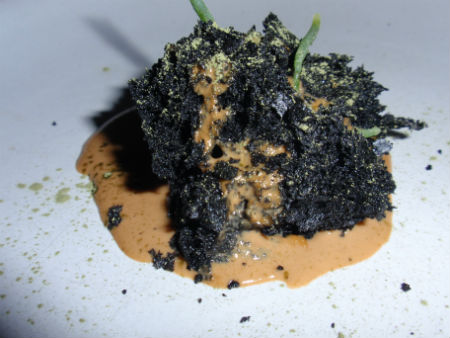 The soup was a take on the region’s classic tortellini in broth, but instead of pasta, it was a stuffed local morel mushroom in a fantastically complex veal broth. (Bottura was inspired by the local mushrooms he found in Cibo chef’s Neil Taylor’s fridge.) The accompanying Tuscan wine (vino nobile de montepulciano 2006 grandi annate avignonesi) was unusual and delicious, deeply fragrant with cherry. 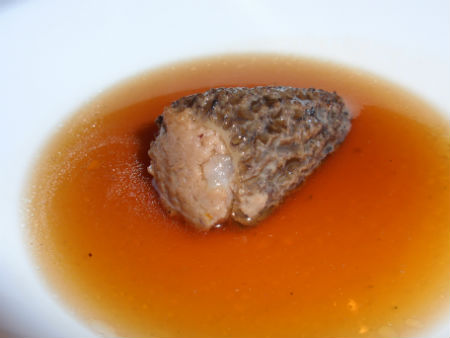 While I appreciated Bottura’s artistry, I didn’t adore every dish. The flavours of the Trenitalia Milano-Bari 1,000 Kilometre Risotto (the name connected the products on the train line between southern and northern Italy), just didn’t work for me. It combined local sea urchins, shaved black Abruzo truffles, veal juice, and blueberries. And while I love truffle oil, I don’t understand the fuss over shaved truffles. Whenever I’m treated to a heap of them, I find them dry and I don’t think they add much to a dish. But I seem to be the odd one out when it comes to being impressed by shaved truffles! 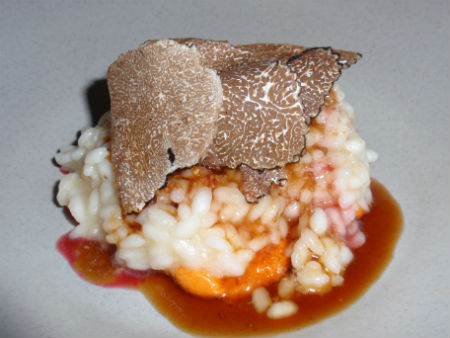 I was impressed by the service. A server was assigned to each person at the table of eight, and before every course, they all stood shoulder-to-shoulder behind us with their plates. On cue, they laid them down in front of each diner in unison. Nice.

So if I had paid $500 for my evening, would I have considered this meal, cooked by this celebrated chef, the best I’ve ever eaten? Not at all. Don’t get me wrong: it was very, very good. I've never tasted flavours as intensely concentrated as in these dishes. But I was more intrigued by the dishes than rolling in rapture. This isn't the kind of soul-satisfying meal you'd order for your last supper, and it's not meant to be.

Enjoying Bottura’s dishes was like spending the afternoon in an art gallery. He aims to make you think, and that he did. I found myself absorbed in contemplating what I was eating and marvelling at how he might have crafted it. But while I appreciate his talent and creativity, I prefer my food more down to earth, like the made-from-scratch pastas that I dug into in Italy. (Executive chef Neil Taylor cooks in this more rustic Italian style on a regular basis at Cibo.) Bottura’s dishes were an experience, and it’s good to see firsthand how he's pushing the envelope. But I’ll take the simple pleasures.

I will and have payed large for great eats.Obviously the pics do not do justice to the flavours being put out here. If first you eat with the eyes, ow, my eye.

So Bloggers With Benefits don't get to try the wine?

Baloney, the best food there is for cheap. Food is all the same, carbo, proto, sugo and salto.

I’ve Got You Babe

Wishing you many happy returns on this Groundhog Day.

Girl in the green jacket at Indigo Robson

I instantly saw you when I walked into the Indigo on Robson Street. Your green jacket and...