Leaning over an oozing round of Camembert, I can’t quite will myself to pick up the knife. For five straight meals I’ve been spreading creamy wedges onto crunchy baguettes, and while my palate is in heaven, the richness is killing me. With a week to sample as much cheese as possible—not to mention flaky croissants and buttercream-laden pastries—I fear that I’ve sabotaged my mission by Day Two. It’s an amateur mistake: I’ve failed to pace myself.

I’m in Paris to indulge in all the bread and cheese the city has to offer. But like the kid given unrestricted access to Halloween candy, I’m facing inevitable overdose. The worst part is, I haven’t even gotten around to the good stuff yet.

Since my last trip to Paris, I’ve been dreaming of dairy. I’ve regaled my husband, Mike, who has never been to France, with tales of floury ecstasy. He heard all about the unbelievably buttery croissant I ate at a café on the left bank and the baguettes with the sublime crumb that I was served every morning at my hostel. Surely if hostel bread was that good, you couldn’t get a bad loaf in Paris.

But we quickly learned that it was easy to find a mediocre one. As soon as Mike and I arrived, starving, at our Parisian apartment rental, we ran out to buy provisions: baguettes and croissants from the nearest patisserie, a hunk of Brie and a double-pack of Camembert from the tiny grocery store down the block. While it was all very good, it was not the stuff of legends. The following day, I tried a different bakery. Solid again, but not rave-worthy.

Time was a-wasting. Googling around to find recommendations, I came across a Context walking tour of food shops, called Baguette to Bistro: Culinary Traditions of Paris. Not only could I sample a variety of bread, cheese, chocolate, Armagnac, and more, but I could ask all my burning questions. What made one humble baguette better than another? What, exactly, did it mean that a cheese was “in season”? And how on earth did Parisians eat all this rich stuff and not keel over? I signed myself up for the tour.

Standing in front of one of Eric Kayser’s bakeries on the Left Bank, guide Marie Lagrange gives us a bit of history. “Twenty years ago it was not that easy to find a good baguette in Paris,” she reveals. The French chef, who runs her own catering company in Paris, says that times have changed: within a five-minute walk of her apartment, she has a choice of three “fantastique” bakeries.

Still, average baguettes lurk around Paris. Lagrange sniffs out a good bakery from the wafting scent: it should be pleasant but not “too obvious”, which indicates artificial. “When you see a baguette that is too perfect, that means it’s made by a machine,” she adds. Another clue? Tiny, waffled imprints from a silicone mat on the bottom. The best bakeries, such as Poilâne, produce bread by hand using techniques passed down over generations.

Lagrange tells us that in the year 2000, Eric Kayser earned the distinction of the best baker in France at the annual Meilleurs Ouvriers de France awards, which recognizes artisanal excellence. He now has over a dozen bakeries in Paris. Our small group samples several loaves, including a nutty buckwheat baguette and a quarter of a hefty round pain de campagne. I tear off a piece of a white-flour baguette and it doesn’t disappoint: the crust has a firm bite but it doesn’t shatter at the tooth, and the inside has a firm, tender crumb. This is the bread I remember.

We continue on to a nearby cheese shop. “Ninety-nine percent of what’s in this store is made with raw milk,” Lagrange says. “It makes a big difference. You kill the bacteria and you kill the taste and the whole flavour.” From the dozens on offer, she buys five cheeses that are new to me. The shopkeeper cuts them into neat portions for sampling, including a thick, almost crunchy-crusted smoked goat cheese. While we taste them, she explains seasonality. In warm weather, cows can graze outside on grass, which gives the milk a better flavour than in winter when they’re inside and confined to eating hay. “The spring and summer milk gives the cheese a much deeper and more intense flavour,” she says. 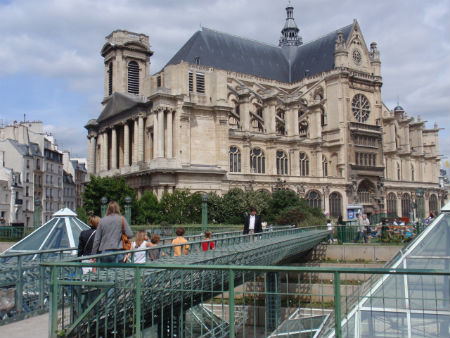 Backed by Saint-Eustache church, the area around the transportation hub of Les Halles was once the central food market of Paris. Carolyn Ali photo.

The following day, I embark on another tour that focuses less on sampling and more on Parisian food culture. (This time, Context Tours has invited me along as a media guest.) I know it’s going to be fascinating just by reading the bio of the guide, Carolin Young. The transplanted New Yorker is a culinary historian who has lived in Paris for years and is writing “an irreverent history of the fork”.

Young’s tour is called The Belly of Paris, and it visits sites described in Emile Zola’s 1873 novel Le Ventre de Paris. Although the tour is steeped in the past, we visit modern shrines to cooking as well. I’m thrilled when we stop in at E. Dehillerin, a delightfully cramped cookware shop that dates to 1820, where Young says Julia Child bought her copper pots and pans.

We explore the area around the transportation hub of Les Halles, which until the 1970s was the central food market of Paris. It stands to reason that speciality food stores and restaurants sprang up to feed off the market’s action. We stop in front of the famous Au Pied de Cochon restaurant and take a peek at its Tropicana-meets-Paris décor. Young tells us that market workers used to come here after their shifts, and it’s where French onion soup was first popularized.

She then leads us to Boulangerie Régis Colin, which proudly displays a shelf of trophies won for its baguettes, croissants, and other pastries. “Always ask for a baguette de tradition”, she advises; it’s made with only high-quality wheat, salt, yeast, and water. “If they don’t have it, then you’re in the wrong bakery,” she says.

“A lot about shopping for food in Paris is about relationships,” she continues as she leads us down the pedestrian Rue Montorgueil. Regulars get the good stuff. Chatting with the proprietor at a frommagerie, she selects some intriguing cheeses, including a wedge of artisanal sheep’s milk Napoléon. 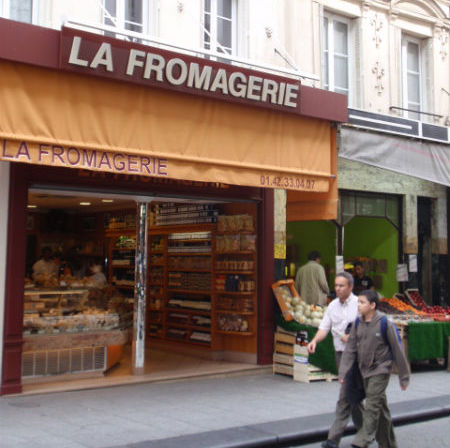 Young tells us that France makes anywhere from 300 to 700 different cheeses. She laughs at the inexact estimate, explaining that neighbours across a river from each other might make the same cheese but the terroir is slightly different, and the aging process different, so each would swear the two cheeses tasted different.

We head down the street to Au Rocher de Cancale, where she’s arranged for us to sample the cheeses over a glass of chilled Brouilly. The sidewalk café is bustling with young people enjoying happy-hour beers. Young says that the restaurant is a hipster magnet, and it’s been a gastronomic hotspot since 1846. In the darkened upstairs dining room, we check out restored frescoes that depict happy diners.

When the tour ends, I circle back to buy more of the cheese, bread, and pastries we sampled. Back at the apartment, I sit back while Mike tears off a piece of baguette.

“Oh my God,” he says, his eyes widening at the first bite. He follows with a wedge of the pyramid-shaped Pouligny-Saint-Pierre unpasteurized goat cheese. “Oh my God!” he repeats. “This is amazing! 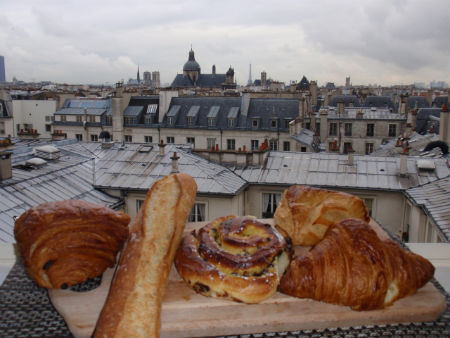 Breakfast with a view at an apartment in the Marais. Carolyn Ali photo.

ACCESS: Context Tours offers a variety of culinary tours in Paris. Food lovers will appreciate an apartment with a kitchen; I rented mine through Paris Attitude. Clotilde Dusoulier’s guidebook, Clotilde’s Edible Adventures in Paris (Clarkson Potter), is a great resource.

You wonderfully transpose the reader to the gastronomic world of Paris. cheese and bread really are important to French culture, thank you for going in our walks and sharing them with your readers!

Merci Merci! I feel coyly vindicated!!
I was in Paris in September and was guiltily, disappointed with the bread that I was so much looking forward to...now I know why ~ Next time I go I will know what to look for...also, so wish I had of known about the Context Tours then and will look forward to that when I return to France!

Got my booster today. It was encouraging and heartwarming to see fellow humans doing the same....

We were standing in line waiting to get our boosters and we talked about the book I was reading, ...