Congratulations are in order for Vancouver-based writer, filmmaker, and performance artist Amber Dawn, who won the $4,000 Dayne Ogilvie Prize from the Writers' Trust of Canada.

The award, established in 2007 in memory of freelance book editor, writer, and manager Dayne Ogilvie, is presented to an emerging Canadian writer from the queer community who "demonstrates great promise through a body of work of exceptional quality".

Amber Dawn, who is the director of programming at Out on Screen, won the award on June 26 at a Toronto event held during the city's Pride Week.

A jury, consisting of authors Kamal Al-Solaylee, Ivan E. Coyote, and Michael V. Smith (who won the inaugural award), described her as a "impressive, heart-stopping talent".

Amber Dawn is the author of the Lambda Award–winning novel Sub Rosa, which the jury praised as "fearless in its narrative and rich in its landscape of metaphor" and "a book that refuses to be overlooked". 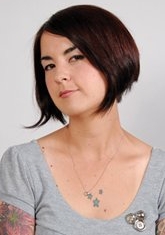 Mariko Tamaki (above), a Toronto-based writer of comics, books, and plays, won the $500 Honour of Distinction.

The jury hailed her for creating "exquisite and highly perceptive portraits of life’s many collisions of identities and desires".

Her body of work includes the 2008 Governor General’s Literary Award–nominated graphic novel Skim (illustrated by Jillian Tamaki), which the jury described as "heartbreakingly brilliant" and stated that it "elevates teen angst to an epic tale of alienation and romance".

Tamaki's upcoming work includes the young adult novel (you) set me on fire and the comic book Awago Beach Babies.

I was a hot girl. Then I could ditch my life and go live in another country without really...

We were standing in line waiting to get our boosters and we talked about the book I was reading, ...