Juan Carlos is giving us the hard sell. As our boat approaches the first lock of the Panama Canal, he stands at the bow with his camera in the area roped off for crew members only. Excited passengers press against the barrier, as if a rumour just broke that George Clooney had stepped onto the red carpet. But the attraction isn’t Juan Carlos, or JC, as the tour guide calls himself. It’s our first glimpse of the man-made marvel that is Panama’s star attraction.

“Now is your chance!” JC booms into his microphone. “I will take your photograph in front of the Panama Canal! For only $10, I will give you a photo and a certificate that proves you were really here!” One by one, he leads takers under the white rope to grin for his camera, which he deftly operates with one hand while clutching the microphone in the other. “Remember,” he repeats, “this is your only chance to certify that you visited the canal!”

While I declined certification, it turned out that there were plenty of excellent opportunities for free photos to come. My five-hour boat ride, which transited part of the Panama Canal, provided an unforgettable look at the 20th-century engineering feat. And since I experienced the canal on a day trip from Panama City, rather than as part of a long journey on a traditional cruise ship, I could flee the boat in the afternoon and spend the rest of my vacation on dry land. 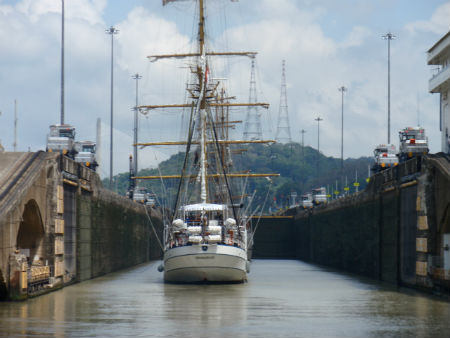 A ship glides through the Panama Canal. Carolyn Ali photo.

A sucker for a good seat sale, I bought an air ticket to Panama City last March without quite knowing what to expect there, other than that famous canal. What I found was a fascinating city that is rapidly heating up as a tourist destination in its own right.

Unlike Costa Rica, Panama may not jump to mind as a vacation spot for Canadians, but it’s no secret among Americans. The New York Times ranked it number one on its list of “The 45 Places to Go in 2012”, citing its “booming” economy and American expatriates and investors who are snapping up real estate for hotels and retirement homes. Tourist infrastructure is expanding left and right in Panama City: the Trump Ocean Club opened in 2011, an enormous 1,500-room Hard Rock Hotel opened last May, and Latin America’s first Waldorf Astoria will debut in March 2013. 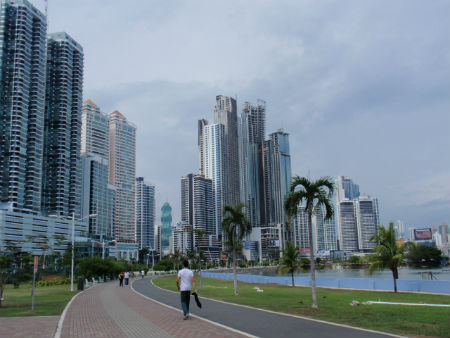 Arriving in Panama City, I was immediately struck by how the skyline looked like Hong Kong in the making. Walking along the blazing-hot boardwalk that separates downtown from the Panama Bay, I craned my neck to see the tops of the steel-and-glass high-rises. In various stages of construction, they are built so close together that it looks as if somebody on the 20th floor could lean out their window and pass a beer to a friend in the apartment building across the way. 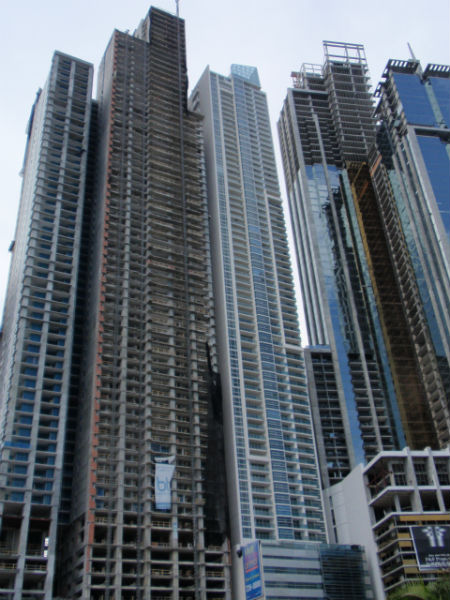 High-rises under construction next to the boardwalk. Carolyn Ali photo.

At one end of that boardwalk lies the old part of town, Casco Viejo, where I stayed. Jutting out on a peninsula, the charming terracotta-roofed neighbourhood looks more like Havana than Hong Kong. Settled by the Spanish in 1673, the walled area fell into disrepair in the early 19th century and became a slum. But over the past decade or so the area has gentrified as both Panamanians and foreigners have transformed the gorgeous 16th- and 17th-century Spanish and French colonial buildings into boutique hotels, art galleries, and chichi restaurants. 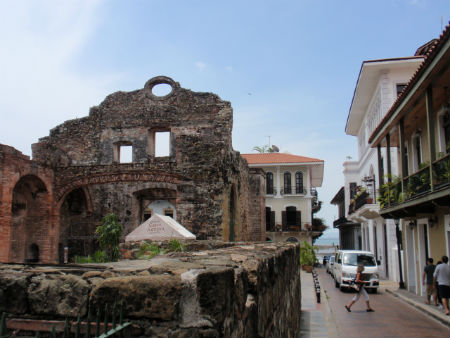 The gentrification has a long way to go, however. Walking around Casco Viejo is like walking around a partially completed Hollywood movie set. On one corner, there’s a magnificently restored Spanish mansion with freshly painted walls, brilliant bougainvillea, and exquisite wraparound wrought-iron balconies. On another, there’s a shell of a colonial building with punched-out windows and palm fronds busting through. Next to that is a boarded-up, graffiti-covered residence, and further on, an apartment building with a treacherous wood-plank staircase open to the street and barbed-wire railings on the balcony. It looks like it should be condemned, but children’s voices come ringing from inside, along with the clank of pots and pans. 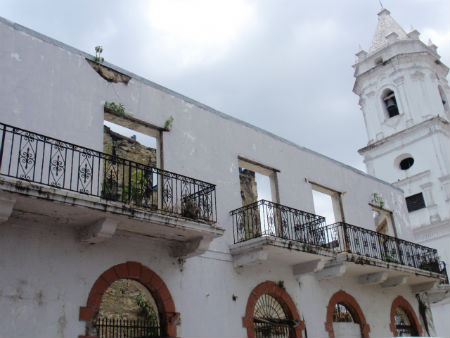 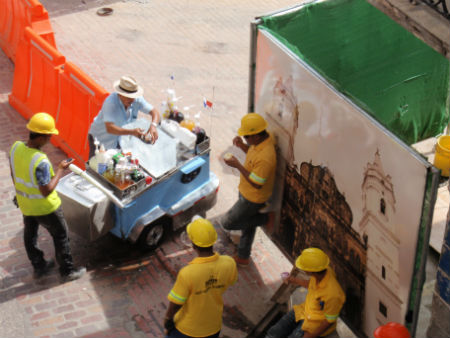 All over the neighbourhood, workers in orange hard hats labour behind shiny signs that cordon off historic areas for restoration. The outdoor cafés that line the elegant squares feel very European, as do the swish Italian delis. But local flavours are easy to find at the hole-in-the-wall cafeterias that pile steam trays high with fried plantains and chow mein. Sitting inside one of these basic restaurants, I supped on a hearty sancocho, the national cilantro-spiced chicken and cassava soup. Gazing out at the sidewalk, I was startled to see a blue milk crate being inched down by a rope from the balcony above. The cook went outside, piled in his dirty dishes, and sent them on up for washing. 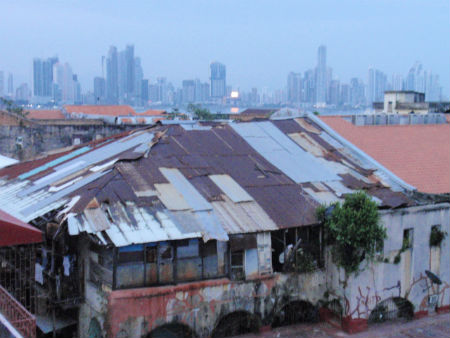 Casco Viejo still has an edge. The area is bordered by two slums, which visitors are cautioned to travel through by taxi and avoid at night. But I found the heavy presence of tourist police reassuring rather than threatening. The taxi drivers, too, were some of the friendliest I’ve encountered anywhere.

Many visitors, however, prefer to base themselves in the gleaming business-district hotels and visit Casco by day. The historic district is within walking distance of the city’s frenetic fish market, where you can buy fresh ceviche and watch fishmongers scale corvina and hack up blocks of frozen octopus. The Metropolitan Natural Park is also worth a visit: its 232 hectares of tropical forest are just a five-minute taxi ride from the gigantic Albrook shopping mall, the city’s transportation hub. 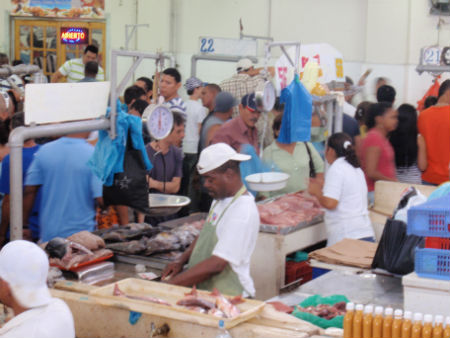 At the park, I walked an easy, hourlong path and encountered lizards skittering across a lagoon, swimming turtles, and even a white-faced capuchin monkey swinging in the trees. Turning a corner on the trail, I froze when faced with a family of raccoonlike animals just down the path. They bore a frightening resemblance to the R.O.U.S.’s in The Princess Bride, although later I learned that the animals were coatis, not Rodents of Unusual Size.

It will be easier for visitors to familiarize themselves with Panama’s flora and fauna when the new Biodiversity museum opens on the city’s Amador Causeway next summer. You can already stop and gawk at the shell of the Frank Gehry–designed building, which looks like a multicoloured scrap-metal pile. When completed, the galleries will showcase the importance of the Isthmus of Panama as a bridge of life between continents.

Cutting between those continents, the canal is a must-see. On my day cruise, we sailed from the Pacific Ocean through the Miraflores and Pedro Miguel locks. We disembarked into the Gamboa jungle about halfway to the Caribbean coast and bussed back to Panama City. (Full canal transits are offered infrequently and take over eight hours.) The partial transit allowed me to experience the raising and lowering of the locks and see the construction of the new, wider locks that will accommodate even larger, post-Panamax supertankers. The project, which promises to double the canal’s capacity, is slated for completion for the canal’s 100th anniversary in 2014.

In the midst of all this transition, now is a good time to visit. And I have to admit, I took plenty of pictures of myself on that boat. After all, you have to prove you were there.

Amazingly informative and detailed, thank you! I enjoyed "seeing" Panama (where I now live full-time) through your eyes. You've outlined the contrasts that, while perhaps jarring for First World visitors, make this such a unique, eclectic, fascinating place!

I don't know what to do when someone hits on me. I guess in some ways it's a good thing...

You helped me, I want to dat...thank you!

I was riding my mountain bike and you were on a road bike. I was stopped on Fern St in North Van...