A trip to Portland is a must for any vegan foodie. You'll never see the word vegan on so many menus as you will in the City of Roses.

With so many mouth-watering options available, where to start? Having spent a little bit of time in the vegan mother ship in recent years, here's my recommendations for a day sampling the best of what PDX has to offer.

If you can get Google transit directions on your smartphone, getting to these hot spots is a cinch. Just buy a US$5 TriMet day pass when you board MAX Light Rail at Portland International Airport, or find a ticket machine at a MAX stop around Pioneer Courthouse Square, the centre of downtown Portland. 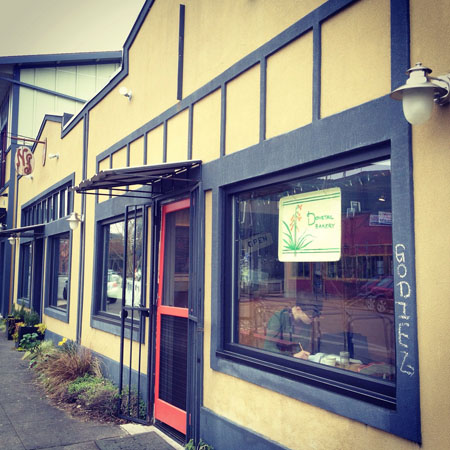 For the most important meal of the day, head over to Dovetail Bakery (3039 NE Alberta Street) in the Northeast. This small, all-vegan shop opens daily at 8 a.m., and on Saturdays and Sundays serves biscuits with tempeh and gravy (US$6), which are to live for.

If you're like me and normally dislike tempeh (fermented soybeans), you may find Portland eats to be the exception. In this case, I didn't even realize that smoky, crispy thing on top was tempeh until I was halfway through the flakey biscuits and creamy, nutty gravy. For those of you who like to keep breakfast simple, Dovetail has muffins, sticky buns, cinnamon buns, and scones. 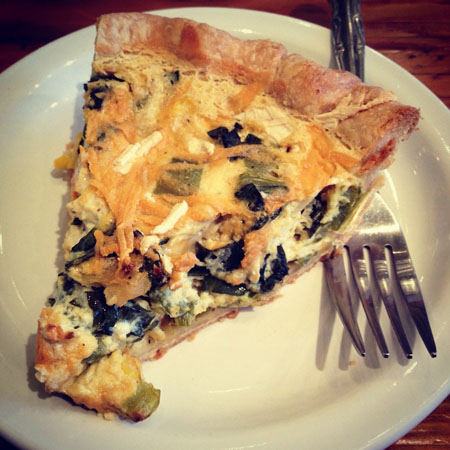 Southwest-style quiche at Back to Eden Bakery. Stephen Hui photo.

After you've had your morning meal, it's worth strolling west through the pleasant Alberta Arts District in order to visit the fully vegan Back to Eden Bakery (2217 NE Alberta Street), which opens at 9 a.m. on a daily basis. If you're still hungry, they've got cookies, cheesecake, pie, and quiche. 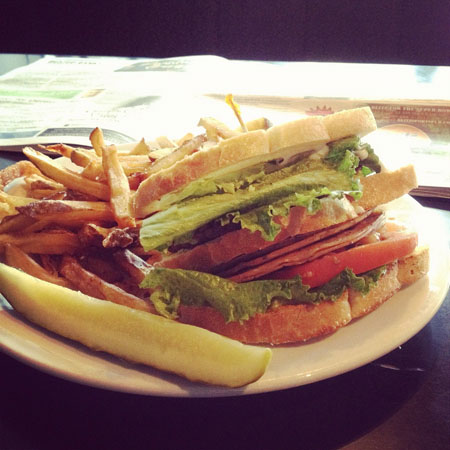 In the Buckman neighbourhood, Hungry Tiger Too (213 SE 12th Avenue) is a good bet for that midday meal. This diner divides its menu into vegan and "classic" sections, and serves breakfast all day. You've already had breakfast, so why not check out the tasty burgers, sandwiches, and entrees?

I've enjoyed the Southeast Club sandwich (full US$11, half US$9.50) on two occasions, and it was an instant favourite. It packs peppered Tofurkey deli slices, tomato, lettuce, avocado, Vegenaise, and, yes, tempeh bacon between three slices of sourdough. Fries, soup, or salad are included. 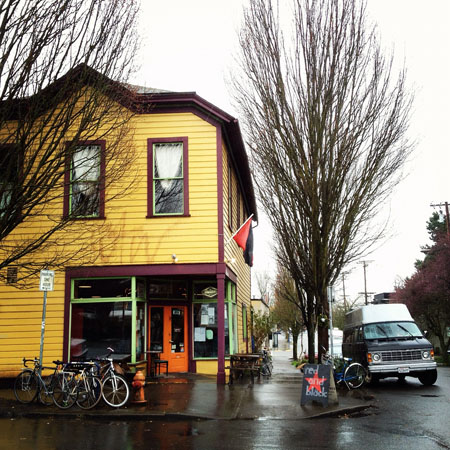 The food and laid-back atmosphere aren't all that Hungry Tiger Too has going for it. This eatery has a prime location. Just down the street, you'll find the Red and Black (400 SE 12th Avenue). A totally vegan, worker-owned café, this spot's a hangout for activists, has a safer-space policy, and made local headlines when one of its owners asked a cop to leave the premises in 2010. 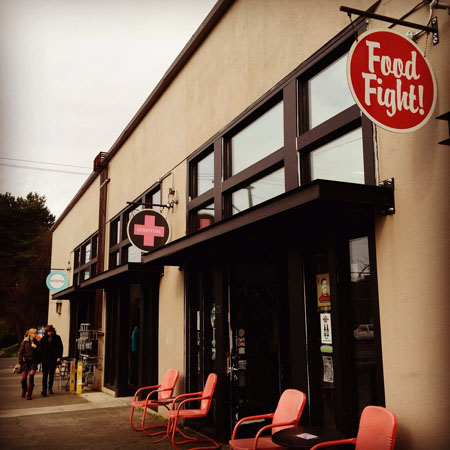 Around the corner lies the famous Vegan Mini-Mall, or what I like to call the centre of vegandom on Earth. Four awesome and fully vegan businesses sit side by side here. At Sweetpea Baking Company (1205 SE Stark Street), there's cakes, cupcakes, sandwiches, and bagels with yummy schmears like bacun scallion, strawberry, and garden veggie. Herbivore Clothing Company (1211 SE Stark Street) sells Bacon Had a Mom T-shirts, Praise Seitan belts, bags, shoes, and books. Food Fight Grocery (1217 SE Stark Street) stocks all the vegan cheese, fake meats, sweets, and snacks you could want. Want a cruelty-free tattoo? You can get one next door at Scapegoat Tattoo (1223 SE Stark Street). 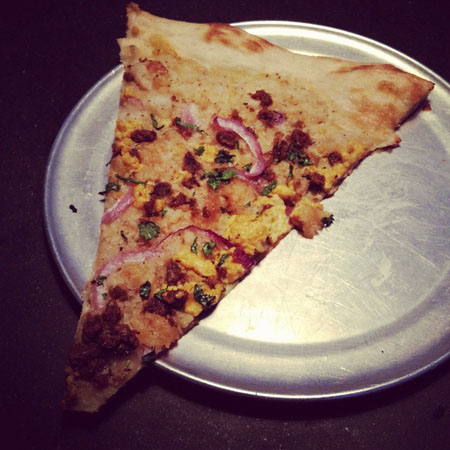 You'll probably be stuffed from all the previous stops, but there's always room for pizza, right? Sizzle Pie (926 W Burnside Street, 624 E Burnside Street) is a pizzeria that knows the difference between vegan and vegetarian pizza. Its menu features both these pie categories, as well as meat.

A 12-inch vegan pizza will set you back between US$12 and US$18.50. A slice of the El Crudo (US$3.75) was delicious, with white bean and shallot spread, seitan chorizo, cheesy tofu scramble, and fresh cilantro.

If you eat at Sizzle Pie's west location, you'll find yourself just across the intersection from Powell's City of Books (1005 W Burnside Street). Since no visit to Portland is complete without a stop at Powell's—billed as the largest used and new bookstore in the world—you might as well go in and replenish your vegan cookbook collection. 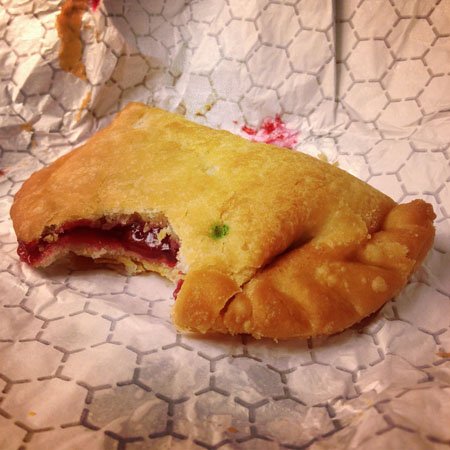 If after all that you're still hungry later, get thee to Whiffies Fried Pies (SE 12th Avenue and Hawthorne Boulevard). Part of Portland's unparalleled street-food scene (Vancouver, take notes), Whiffies cooks up sweet (US$4) and savoury (US$5) pie pockets and is open until 3 a.m. (closed Mondays). Vegan options include the tofu pot pie, as well as apple, coconut creme, and mixed berry.

If deep-fried pies aren't your thing—are you crazy?—there's other choices available in Cartopia, the food-truck village Whiffies inhabits. For instance, there's the vegan poutine at Potato Champion and Pyro Pizza offers vegan cheese as an option.

Too bad every single one of these recommendations is gluten heavy (photo ones anyhow). Do any offer gluten free options?

Yes, gluten-free options are quite common at vegan-friendly restos in PDX. For instance, Sizzle Pie offers the option of a gluten-free crust, and Sweetpea Baking Company has gluten-free biscuits and gravy.

Wait I hear something, hey it's Clara Peller...."WHERE'S THE BEEF?"
I think we can come up with a few more exciting reasons to head down the I-5 to Portland for other than peppered tofurky slices and fermented soybeans?

Oh how I miss Portland eats!!! From the great places you write about to their vegan food carts, it's one of my favourite cities. This is just a reminder that I need to go back this summer.

Great article! I've been to many of those places - good recommendations.

Portland has fantastic eating for many a taste

I am happy to see more people attempting to change the way we think about food and what we are consuming– Consumers have the right to know where their food comes from and how animals are treated before they reach their plates. This is a good, short video to watch about this topic: MeatVideo.com. Or visit ChooseVeg.com for information on adapting a more compassionate lifestyle.

I've been to Blossoming Lotus on several occasions, and was quite pleased with the food, service, and atmosphere. Have you tried it ?

I haven't been to Blossoming Lotus yet, but I plan to get there soon.

Was so awful, with my family, that I know that this Xmas, and every other going forward, can only...