William Jans never forgets a face. So when he arrived by train in Xi’an, China, and asked directions from the first local person he overheard speaking English, a light of recognition clicked on. This random stranger matched a profile picture of somebody on the CouchSurfing website he had browsed earlier. (The site connects travellers with locals all over the world who are willing to offer a free place in their home to crash.) “Is your name Rachel Marr?” he asked the woman. Indeed, it was. Although he hadn’t gotten around to contacting her, he happened to stumble upon her in a city of over eight million people. He ended up sleeping on her floor that night.

Extraordinary things just happen to Jans. That’s probably because when he travels, he chats up anyone and everyone and isn’t afraid to take risks. That results in some fascinating experiences—and even better photos.

A Vancouver corporate photographer, Jans travels for his love of people and wacky experiences. Every couple of years, he takes off for a two-month trip and then returns to stage a slide show about it. His new show, Off the Wall in China, premieres in Vancouver on May 25 in the theatre at Prince of Wales secondary school (2250 Eddington Drive). It runs again on June 1 in the theatre at John Oliver secondary school (530 East 41st Avenue).

As anyone who has seen one of Jans’s five previous shows, such as Solo in South America, can attest, these are no mere slide shows. There’s a reason he regularly sells out 800-seat theatres: the shows are legendary for being entertaining and fast-paced, and featuring one jaw-dropping image after another. Jans prefers the term multimedia extravaganza to describe how video, audio, and audience engagement shape the experience. 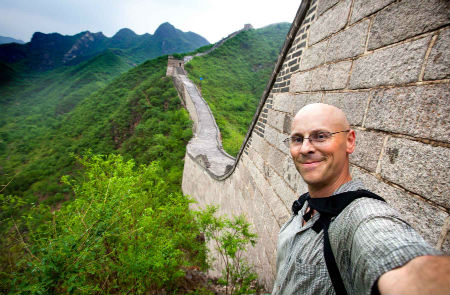 Not content with the average tour, William Jans explored the Great Wall of China on his own. William Jans photo.

In a phone interview with the Straight, Jans laid out some of the highlights of Off the Wall in China, which features images from his 2011 trip to China and the Philippines. As one might guess, the Great Wall has a starring role. But it wasn’t enough for Jans to visit the landmark along with busloads of other tourists; instead, from Beijing he travelled to the more remote Huanghua section, where he was able to slip away and spend the night alone on the wall. Why would he want to do that? “Because it’s incredibly cool,” he said with glee, as if pointing out the obvious. He added that camping out in a watchtower made for “a horrible night’s sleep but a great experience”.

It’s this kind of hard-core experience that many in Jans’s audiences enjoy living through vicariously. “When people come to these shows, some of them are die-hard travellers who maybe want to do this, others have been and want to reminisce, and a big portion are people who never want to go and take these risks but love sitting in a comfy chair and seeing what it’s like,” he said. Through his shows, Jans builds a picture of living the moment. 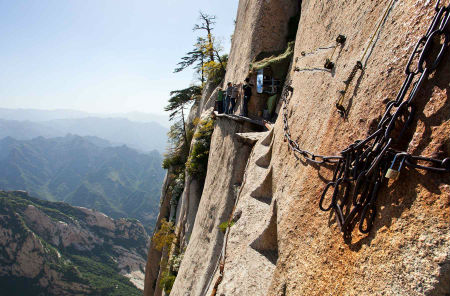 In China, Jans also visited the terracotta warriors in Xi’an and hiked the perilous Huashan cliffs nearby, inching along a shockingly narrow path with no railing and a 1,500-metre drop. In the town of Kangding in western China, he visited a clinic where the Vancouver-based charity Seva Canada carries out cataract surgeries. Jans was allowed into the operating room to document some of them. “It was pretty emotional and powerful for everyone involved,” he said of watching the patients wake up with restored vision. He also paid for the surgeries of several patients—“probably the best money I’ve ever spent,” he said. 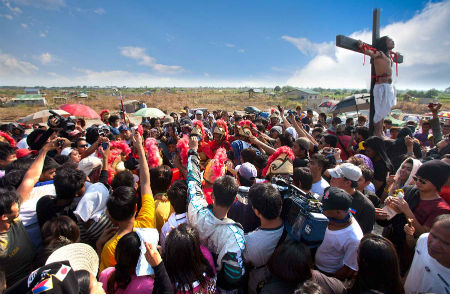 In the Philippines, he travelled to Palawan, south Luzon, and the rice terraces of Banaue. He timed his visit to San Fernando, in Pampanga (about two hours north of Manila), for Good Friday to coincide with the San Pedro Cutud Lenten ritual. “It’s basically Christian volunteers choosing to get nailed to the cross to atone for their sins,” he explained. “It’s about people who want to show their devotion.”

Jans was intrigued by the ritual but didn’t quite know what to expect. He thought the atmosphere might be foreboding, or threatening, as “they really do nail them through the feet.” But he was surprised at the jovial festival atmosphere. “It was so not exactly what I expected,” he recalled. “It’s all very fun and positive.…It’s a family-fun festival: you can buy SpongeBob SquarePants balloons and eat Popsicles while watching people get crucified. There’s kids everywhere and it’s really fun.” While the resulting photos are not for the squeamish, the story behind them is fascinating.

In addition to the two presentations of Off the Wall in China, Jans is restaging his 2008 show Tales From Tanzania, which features a climb up Mount Kilimanjaro, a safari, and a stay with the Masai people. The Tanzania show happens on June 8 at John Oliver secondary school. And for the first time, he’ll be offering a photography workshop on June 10 to teach travellers how to take better pictures. (The location is still being finalized, but it will likely take place at the Cambrian Hall [215 East 17th Avenue]; check his website for updates and to sign up.) 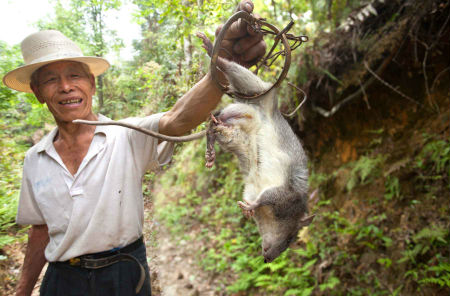 A rat for the record books on the rice terraces near Guilin, Guangxi, China. William Jans photo.

“I’ve been bugged for years to do it, so I’m finally doing it,” Jans said. He’ll cover how to travel safely with your expensive gear (a piece of duct tape giving the impression that it’s cheap helps), technique, and how to get those fantastic people shots. Hint: it’s partly about seeing people as people, not objects. A friendly chat opens doors. “Learn a bit of the language if you can because it goes a long way,” he advised.

To buy tickets for William Jans’s shows or register for the workshop, see wrjphoto.com/.

Speaking a new language is challenging. Even harder when I’ve never heard it spoken around me...

You asked for directions to the Mayne island ferry departure area and I was on my way to Galiano....