As one of the finest songwriters in Canada, Stephen Fearing has built a national and international audience for his music, doing it old school through countless performances at intimate venues and on the concert stages of festivals and theatres across Canada, the US, and the UK, with appearances at major events like the Reading Festival and WOMAD, to name just a few. Fearing has released ten albums as a solo artist, featuring musical guests including: Bruce Cockburn, Margo Timmons, Richard Thompson, Shawn Colvin, Sarah McLachlan, and Suzie Vinnick. As co-founder of Blackie and the Rodeo Kings he has released nine albums, and two albums as half of the duo Fearing & White. Like the guests on his albums, the many awards and nominations that have come his way over the years speak to the respect he has earned among his peers, presenters, and critics. With a life of many relocations and countless months on the road performing, Fearing is a gifted storyteller and true musical nomad with the ability to captivate audiences of all sizes and attitudes. “Getting on stage is the fun part, especially when the adrenaline kicks in,” he says, with a broad smile. “People want to relax and be taken on a journey. I sketch out my shows so they deliver on that.” 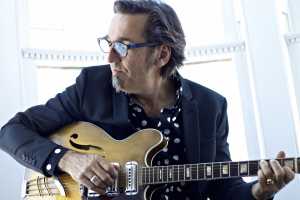