The Lonesome Ace Stringband have been described as "an old-time band with bluegrass chops that play really good folk music".

The band brings together three veterans of the Canadian roots music scene John Showman (New Country Rehab, Creaking Tree String Quartette) on fiddle, Chris Coole (David Francey Band, Foggy Hogtown Boys) on banjo, and Max Heineman (Annie Lou, The Good Brothers) on bass. The Lonesome Ace Stringband brings grit, skill and abandon to old-time, Appalachian folk songs and fiddle/banjo tunes. These are songs and tunes for life and all of it’s occasions: festivals, dances, wars, parties and funerals. The music comes from a tradition that has inspired and brought together generations of people. It’s themes - love, loss, hard work and hardship, faith, and everyday life - speak to everyone.

Through their high-level singing and playing, a diverse, accessible repertoire, and professional showmanship, the band is winning fans and critical acclaim around the world. The band will be releasing it's 3rd album "When the Sun Comes Up" in January 2018.

"three of the most accomplished old-time musicians on the planet, The Lonesome Ace Stringband does a masterful job of melding their talents"
- Brad Kolodner (WAMU Washington, DC) 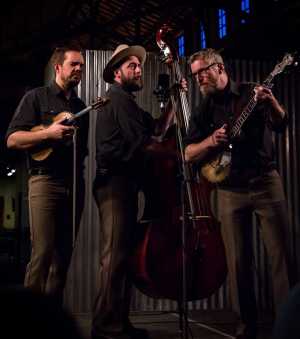