The play will be performed in the rarely opened private rooms above the historic Penthouse Nightclub. Converted for this production to a studio theatre, these upstairs rooms once hosted exclusive parties and performances by music legends like Louis Armstrong, Ella Fitzgerald, Sammy Davis Jr, and Frank Sinatra.

A Steady Rain: With dark themes, sharp storytelling and biting repartee, A Steady Rain explores the complexities of a lifelong bond tainted by domestic affairs, violence, and the rough streets of Chicago. Joey and Denny have been best friends since kindergarten, and after working together for several years as policemen, they are practically family: Joey helps out with Denny's wife and kids; Denny keeps Joey away from the bottle. But when a domestic disturbance call takes a turn for the worse, their friendship is put on the line.

Keith Huff is a resident playwright at Chicago Dramatists and the author of numerous plays that have been produced off Broadway and internationally. He was a Writer/Co-Producer for AMC's Emmy- and Golden Globe Award-winning series Mad Men, for which he won a 2011 Writers Guild Award (Best Drama Series). He is also a Writer/Producer for the NetFlix series House of Cards. Huff’s play A Steady Rain broke Broadway box-office records and featured Daniel Craig and Hugh Jackman in the lead roles. 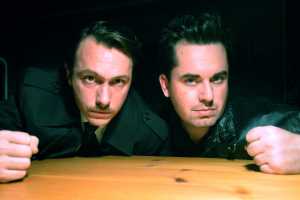