La Chinga is a hard Rock power trio with psychedelic powers sitting on the worlds edge in Vancouver, Canada. Drawing from Sabbath, Zep, the MC5 and their own superbad habits, La Chinga has established a beachhead with Detroit's Small Stone records and a penetrating buzz across Canadian campus radio. Released in 2013, the bands debut self-titled album prompted ecstatic reviews from the kind of people who wonder why they don't make em like this anymore.

We Hunt Buffalo create songs with hard hitting, fuzz rock grooves and psychedelic overtones. It's a culmination of many years playing music together in a small Vancouver suburb.

The Thick Of It (Vancouver) // https://www.reverbnation.com/thethickofit

Since 2008 this is the third line-up for THE THICK OF IT and the third coming of a different sound for the band.
In 2008 a 5 song EP titled " Destroyed " was released , the songs were more acoustic rock driven and were well received by fans. After a few years of playing shows and writing the band went back into the studio to record more music and ended up with a full length album titled " First Day Of Death" which was released in July of 2010. This album had a mix of acoustic rock and heavier rock songs and showed how the band was evolving it's sound into they're heavier scope of writing .Then after a break the band decided to record 2 all acoustic songs which they descretely released in 2013. Over the next few years all band members were also playing in other projects, local and international but all the while still writing new music for THE THICK OF IT.
Although the live shows were less often the writing of new material was still going strong. In March of 2017 local producer Kris Siegers took a interest in the band and eagerly wanted to record new songs. Kris had worked with Russ Bergquist , the bassist for the band in the past but did not know the other members. Kris wanted to capture the pure essence and sound of the band and immediately had chemistry with all members of THE THICK OF IT. To say that these new songs demand the listeners attention is a understatement, the new music created by these seasoned, pure musicians is " Beautifully Crushing" . Kris Siegers achieved his production goals and then some by not only capturing the sound of the band but taking it to a new level.

The band will release the songs as singles one at a time every few months starting in 2018. The band will be releasing updated information on releases as soon as the songs are 100% ready to share with the world. 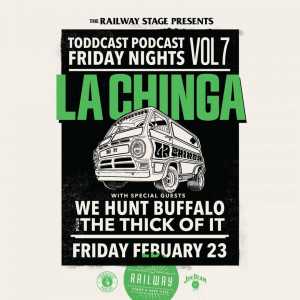