BOMBHEAD is a thematic exhibition organized by guest curator John O’Brian that explores the emergence and impact of the nuclear age as represented by artists and their art. Strongly associated with obliteration and destruction, nuclear technologies have had a profound cultural and ecological impact since their development in the mid-20th century.

Encompassing the pre- and postwar period from the bombing of Hiroshima and Nagasaki in 1945 to the triple meltdown at Fukushima Daiichi in 2011, BOMBHEAD brings together paintings, drawings, prints, sculpture, photographs, film and video that deal with this often dark subject matter. The exhibition will address some of the most pressing issues of the postwar era. What has been the role of art in producing an image of the bomb and nuclear energy? Have nuclear art and images heightened or lessened anxieties about the atomic threat, or have they done both simultaneously? How should different expressive approaches to nuclear risk be understood? The themes explored in this exhibition will strongly resonate with the works on view in Takashi Murakami: The Octopus Eats Its Own Leg, which reflect Murakami’s own reckoning with the nuclear age. 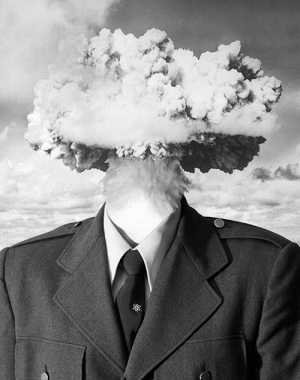