Adapted and directed by Joan Bryans from Oliver Goldsmith’s self-described "laughing comedy" the play revolves around Charles Marlow, a young bachelor who brims with confidence when dallying with working-class women but becomes a shivering bundle of nerves in the presence of high-born ladies. Travelling to the home of his father’s associate Mr. Hardcastle. Marlow and his friend Hastings are tricked into thinking that Mr. Hardcastle is a common innkeeper.
While at the "inn," Marlow unexpectedly runs into Kate, the woman his father wants him to marry. He's so terrified, though, he can't even look at her. So Kate decides to don the unthreatening guise of a barmaid, stooping in social status to conquer his heart. After a series of ridiculous intrigues, more pranks and an unexpected visit from Marlow's father, Marlow discovers that his love has the power to overcome his fear.
Sunday Matinees on March 4 and March 11 at 2:00PM 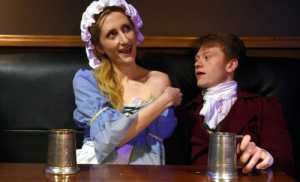