Once On This Island is a one-act musical with a book and lyrics by Lynn Ahrens and music by Stephen Flaherty. Based on the 1985 novel "My Love, My Love; or, The Peasant Girl" by Rosa Guy, it is set in the French Antilles archipelago in the Caribbean Sea. The show includes elements of Romeo and Juliet story and Hans Christian Andersen's The Little Mermaid. It is the story of an orphaned peasant girl named Ti Moune, who uses the power of love to bring together the different social classes living on her island.

The original Broadway production ran from 1990 to 1991, and the West End production opened in 1994, where it won the 1995 Olivier Award for Best New Musical. The musical is currently a NY Times Critics pick and being revived on Broadway that opened on December 3, 2017 after being in previews since November 9, 2017 at the Circle in the Square Theatre.

Director Damon Bradley Jang states "we wanted to cast based on the culturally diverse community of performers who make up Greater Vancouver and might otherwise be underrepresented in the city. We fully acknowledge that the story is a largely set in Haiti but we wanted to use the story as a platform to address the more universal themes of love, death, and social prejudice. In the agreement, the writers have stipulated that the can be done with an multi ethnic cast as long as these themes are presented.Traditionally, the show focuses heavily on the division of class indicated by paleness of skin. The native islander "peasants" were darker skinned and the French "Grand hommes" were lighter skinned. However, in our version, our Ti Moune (Brianna Clark) is "pale skin" in comparison to our Daniel (Michael Gnansounou) who is "darker skin" which is a bit of a nontraditional casting choice. Both of whome are of mixed race heritage. We didn't plan that, they were simply the best fit for the roles. We also have our gods with Hebrew, African, Latin and Korean ethnic backgrounds. At the end of the day, these are storytellers, telling a story." 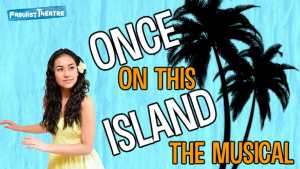