In order to get his creative juices flowing (and to stave off the panic he feels with fatherhood looming) Doug decides to document the life of his buddy Jason (James Pizzinato), a disenchanted actor who is going through relationship issues of his own. But when the project stretches to incorporate covert surveillance footage of casual sex and drug-use, the lines between artistic integrity and personal doucherie become confused (at least in Doug’s mind).

Tilting between satire, art film, and (just guessing here) self-portrait, this debut feature implies we’re all of us stuck in an unhealthy relationship with our beautiful, impossible home town. Yet despite that subtitle and the copious bad behaviour on display, there is something romantic about Lewis’s quixotic search for meaning amongst these disconnected, distracted and disengaged twentysomethings, his obvious misgivings about the viability of Canadian film notwithstanding.

Handsomely shot in and around East Van, and featuring a terrific ensemble of young local actors, The Age of Adulting takes a dim view of the present, but holds out plenty of promise for the future. 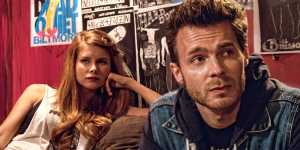