Dave is trying online dating. As he says... online dating makes sense, in theory. Look for someone you have things in common with, and who you like the look of... should be good, right?

Come find out if Dave is right as he embarks on a search for the love of his life and in the process meets some very eclectic Vancouver women. And Nigerian!

You've Got Male is a hilarious multi-media comedy by Clive Scarff, featuring the comedic talents of Joshua Murdoch, Jillian Zavazal, and Tanya Macpherson. Staged at the state-of-the-art Pal Studio Theatre in Coal Harbour, this is You've Got Male's second run after an extremely successful run in West Vancouver.

YGM is a completely "made-in-Vancouver" production!

(Pay what you want preview on April 11th) 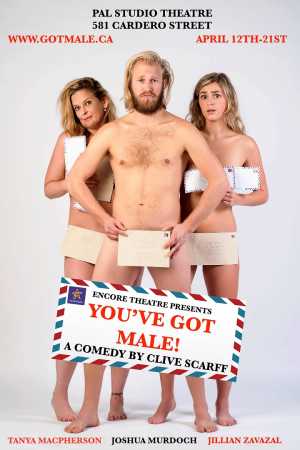