The Naval Officers Association of British Columbia and the Vancouver Naval Veterans Association will be conducting the Battle of Atlantic Memorial parade at the Sailors’ Memorial in North Vancouver, on Sunday 6 May 2018 commencing at 1000AM.

This parade will feature veterans, sailors of the Royal Canadian Navy, Navy League and Sea Cadets, and the Naval Veterans Band.

Members of the public are welcome and encouraged to attend. 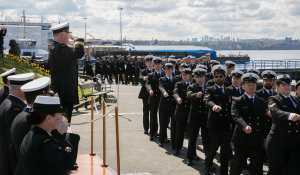