Theatre Conspiracy is thrilled to present the world premiere of Victim Impact from Friday, June 8 to Sunday, June 17 at The Cultch.

In the largest Ponzi scheme in B.C. history, former notary public Rashida Samji drew family, friends, and their communities into a vast web of deceit between 2003 and 2012. Victim Impact is Theatre Conspiracy’s newest contribution to the theatre community – a live documentary investigating mysterious aspects of this case, following it through the courts and down the money trail. This innovative piece of theatre looks at the fallout for those affected as they got sucked into the vortex of civil and criminal trials. Over 200 people were ripped off in this fraud scheme, which involved over $110 million.

In addition to the theatrical performance piece of this project, Victim Impact will continue to evolve through feedback to the podcast series – Victim Impact: The Fraudcast – which is available now at conspiracy.ca, iTunes, SoundCloud and Stitcher.

“From Samji’s claim that she was the ultimate victim, to the tangle of court trials and attempts to get money back to the victims, the show exposes the dramatic effects of a vicious scam,” says Tim Carlson. “It destroyed the hopes and dreams of hundreds of people including Samji’s family members and friends. And they are not satisfied that justice is being done.”

WHERE: The Historic Theatre at The Cultch | 1895 Venables Street, Vancouver 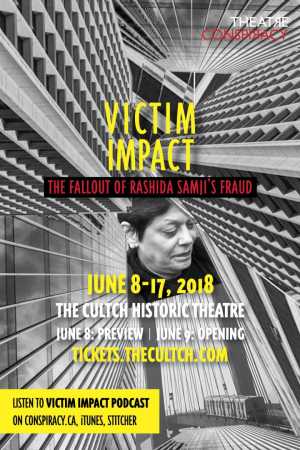