The Virgin Spring at The Cinematheque

Bergman won the first of his three Foreign Language Film Oscars — and Sven Nykvist became Bergman’s regular cinematographer — with this powerful drama of faith and vengeance, which recalls The Seventh Seal in its immaculate recreation of a barbarous, superstitious medieval milieu. Written by Ulla Isaksson, and based on a 13th-century ballad, the film stars Max von Sydow as Töre, a landowner whose beloved daughter is raped and murdered while on a religious pilgrimage. In a strange twist of fate, the killers later seek shelter at Töre’s farm. Although harrowing, The Virgin Spring manages a grace note of hope and a suggestion of the divine not found in Bergman’s subsequent “Faith” trilogy (which begins with Through a Glass Darkly, his second Oscar winner). The film won the critics’ prize at Cannes, where it (and Buñuel’s The Young One) was announced as “too good to be judged” for the Palme d’Or!

Rating: 18+
PERSONS UNDER 18 MUST BE ACCOMPANIED BY AN ADULT
ANNUAL $3 MEMBERSHIP REQUIRED FOR THOSE 18+

"Sven Nykvist's luminous black-and-white photography conspiring with the austerity of Bergman's imagery to create an extraordinary metaphysical charge." - Time Out 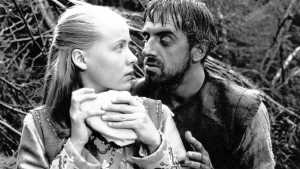