Infamous alleged spy felled by firing squad in WW1, a mother of modern feminism who openly discussed her own sexual desire and played by her own rules, Mata Hari was a trailblazer, inspiring generations of women as a performer who carved a new place for dance in European society.

Fascinated by this woman who named herself Mata Hari, Rachel Peake and Sinziana Corozel offer a physical theatre piece that examines and interprets the constructs of identity and performance through the prism of her life.

“The physicality so central to Mata Hari, is central to our depiction of her story.” said creator/director Rachel Peake. “Devised and performed in French, the piece transposes Margaretha Geertruida Zelle MacLeod’s controversial life using the poetry of movement, and that of spoken text, with much of the script using Mata Hari’s own words as recorded in the French War Council interrogation files of the time.”

“MATA HARI is also informed by in-depth investigation of the Indonesian dance practices on which she based her work,” said creator/performer Sinziana Corozel, “and of the dance movement that was springing up around her at the time, seen in the works of other artists such as Isadora Duncan.” 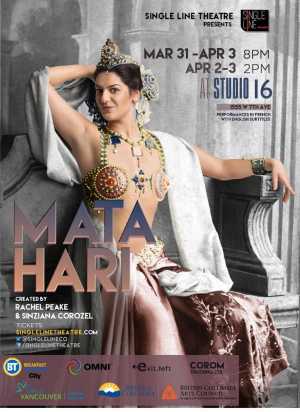 The Georgia Straight's guide to Halloween 2020