Marianne Nicolson’s new yearlong installation, Oh, How I Long for Home, addresses a persistent idea of the city as a conflicted promise for Indigenous people. Representing monetary wealth, Western education and a pledge of so-called progress, the city’s neon lights, stocked department stores, schools, and wallpapered rooms project a notion of success for people outside urban centres. Vancouver’s colonial settlement in the second half of the 19th century to todayis characterized by cycles of capitalist development, patterns which can be witnessed from the Teck Gallery’s window looking over the train tracks and inlet.

Nicolson’s installation hinges on photographs the artist found of her relations on Vancouver’s streets during the city’s neon “golden age” of the 1940s and ‘50s. These images, alongside photographs the artist recently took of the extant neon signage along Hastings Street, are combined with a neon text work to question the lure of the bright lights and its impacts. For many, if not most, the shiny image of the city did not deliver and instead offered a trap disconnected from traditional values.

In its translation to Kwak’wala, Oh, How I Long For Home–‘Wa’lasan xwalsa kan ne’nakwe’–refers to a “return,” as well as to the cycle of the sun rising. The double meaning of title not only points to an idea of home as Indigenous territory, but the longing for home that settlers also seek, complicated by unceded lands. The Teck Gallery’s siting within Vancouver (which sits on unceded Musqueam, Squamish and Tseil-Waututh land) as a public gathering space in an urban university campus in a building that was formerly Spencer’s Department Store, are key layers through which to read Nicolson’s responsive work.

Victoria based artist Marianne Nicolson (‘Tayagila’ogwa) is of Scottish and Dzawada’enuxw First Nations descent. Her artistic and academic practices are platforms to advocate for Indigenous linguistic and cultural resurgence. Her work has been exhibited at Vancouver Art Gallery, Art Gallery of Greater Victoria, National Indian Art Centre, UBC Museum of Anthropology, 17th Biennale of Sydney, National Museum of the American Indian, Confederation Centre for the Arts, and Taipei Fine Arts Museum. She has undertaken numerous public artworks. She holds a PhD in Linguistics and Anthropology from University of Victoria, an MFA in Visual Art from University of Victoria and a BFA from Emily Carr Institute of Art & Design. 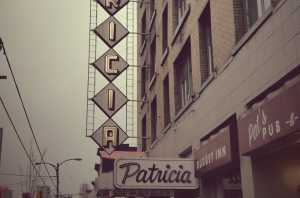