Join us we pay tribute to one of the most popular and influential electronic bands the world has ever known. Founded in 1980, originally from the town of Basildon, Essex, United Kingdom, Depeche Mode are one of the most enduring and successful bands to have emerged from the new wave/new romantic era, having sold over 100 million albums worldwide. The band name is derived from a French fashion magazine, Dépêche Mode, which means "fashion dispatch."

You'll hear tracks that span the gamut of their career, from Speak and Spell to Delta Machine, including an absolute slew of rare remixes and B-sides. You’ll hear solo works from Martin Gore and Dave Gahan including his guest vocal appearances with Soul Savers as well as tracks by Alan Wilder's Recoil.

And, of course, you'll hear plenty of 80s/90s classics by other alternative/synthpop/new wave artists mixed in as well.

Descent Dress Code
Descent Sundays boasts an exclusively nonexistent dress code. "Why?" you ask. Well, it's simple: We want everyone who comes to our events to be comfortable. New people entering the scene, or just checking it out, may not have figured out their style. So you may be wondering what is acceptable. Jeans and a tshirt? No problem. Full out Goth? Totally AWESOME. Punk kid? Rock god? Sk8tr girl? Great! Sweet! Wicked! Feel like going all out in some jaw dropping ensemble? You're totally welcome to. Come how you want to but we are strongly encouraging everyone to dress up in their favourite Gothic style. 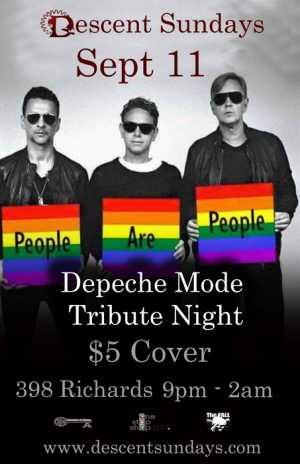