Touchstone’s fall production, the first of their 2016/17 season, is Brothel #9 by Anusree Roy. Directed by former Artistic Director Katrina Dunn as her final directorial offering for the company, the show stars Vancouver native Laara Sadiq in the lead role as Jamuna and rising star Adele Noronha as Rekha. Rounding out the cast are David Adams as Birbal and Shekhar Paleja as Salaudin.

Brothel #9 premiered at the Factory Theatre in Toronto in 2011 and was the winner of both the 2011 Dora Mavor Moore Award for Outstanding New Play and the Carol Bolt Award for Playwrights. Anusree Roy was also the recipient of the 2011 Siminovitch Prize Protégé Award (purse of $25,000) and selected as a drama finalist for the 2012 Governor General Literary Awards for Brothel #9.

The show opens with a young woman named Rekha arriving in Calcutta, expecting to begin work in a light-bulb factory. She quickly discovers, however, that she has actually been sold to a pimp named Birbal by her own brother-in-law. When she pleads to go back to her village, Birbal threatens her with violence and tells her matter-of-factly that he will easily be able to track her down if she tries to escape. Moments later, the local police officer Salaudin stumbles upon the scene and Rekha thinks he might be her salvation – but instead he drags her to the back room and rapes her, becoming her first "client." All through Rekha's terrified howls, an older prostitute Jamuna sings to herself and makes fish curry, seemingly completely unaffected. Jamuna has long ago become resigned to her trade. In these conditions, Rekha is forced to shape her own destiny and find inner liberty.

“Hard-hitting … There's hardly a moment here to get your bearings or catch your breath. And what comes as a shock is how quickly we - like innocent, virginal, religious Rekha - acclimatize to the warped morality of this world where sex slavery is treated with a shrug. The horror wears off and, within a few scenes, the monsters of Birbal, Salaudin and Jamuna have become complex, complicated humans simply going about their day-to-day existence. … an impressive work from Roy.” THE GLOBE & MAIL 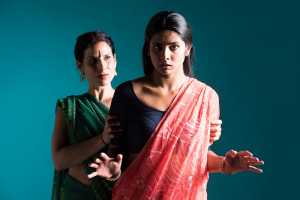