Theatre In the Raw Presents: THE THREEPENNY OPERA

This fall, Theatre In the Raw is bringing to Vancouver stages the Bertolt Brecht and Kurt Weill 1928 classic musical work, THE THREEPENNY OPERA, reimagined as a mixture of Victorian era setting with a Commercial Drive flavouring, under the direction of Jay Hamburger and Music Director Earle Peach!

Brecht and Weill turned with their THE THREEPENNY OPERA to John Gay's 18th-century THE BEGGAR'S OPERA to fashion this savage, biting commentary on bourgeois capitalism and modern morality. Set in Victorian London, the bitter tale is told of the predatory outlaw known and swift ladies man Mack the Knife. Through rousing and notable songs as well as intricate relationships of high and low city folk, THE THREEPENNY OPERA portrays a society turned upon its head with biting critique, and mysterious characters, and the Raw edge from Jay Hamburgers colourful production; a classic work of early 20th century theatre and a landmark in unforgettable musical theatre brought to Vancouver audiences this Fall at Strathcona’s The Russian Hall.

Theatre In the Raw presents THE THREEPENNY OPERA - Book and Lyrics by BERTOLT BRECHT - Music by KURT WEILL for 10 English Adaptation by Marc Blitzstein; performances from November 16th to the 27th at Strathcona’s THE RUSSIAN HALL (600 Campbell Ave).

• Tickets: Adults $25/ Students $20 - cash at door
• www.theatreintheraw.ca/tickets for info on how to reserve or pre-purchase tickets

• From the producers of BRUCE: THE MUSICAL, YIPPIES IN LOVE, and THE RAYMUR MOTHERS.
• THE THREEPENNY OPERA is Theatre In the Raw’s first musical since the 2014 original musical THE RAYMUR MOTHERS, winner of the Applause musical society 2014 Ovation award for Best New Work. 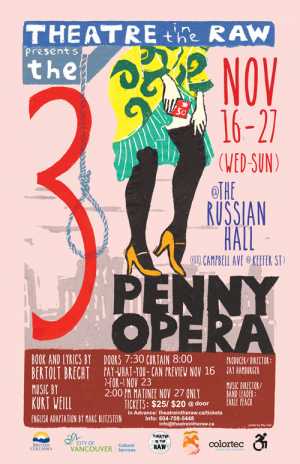