Mark your calendars! The first Sunday in December is the official date of the 13th annual Rogers Santa Claus Parade - December 4th, 2016. The parade is the largest Christmas parade celebrated in Western Canada. In the spirit of giving, the free, family-fun event is also one of the largest food and fundraising events for the Greater Vancouver Food Bank Society. It’s the perfect kick off to the holiday season!

PARADE ROUTE:
At 12pm, the parade will begin at West Georgia Street and Broughton, travel east along West Georgia, turn south on Howe and finish at Howe and Smithe.

A very special part of the Rogers Santa Claus Parade is celebrating the
“Spirit of Giving.” Each year, on parade day, volunteers collect non-perishable food items and monetary donations on behalf of the Greater Vancouver Food Bank Society. For every $1 donated, the Food Bank can purchase $3 worth of food – so remember those loonies on Parade Day! 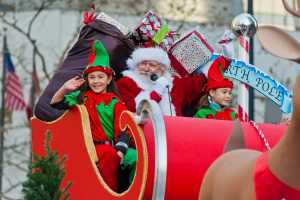