November 19 - 21 at the Western Front and Merge
The Vancouver Assembly1 festival, three concerts and two workshops, is a creative music and improvisational gathering presented by the New Orchestra Workshop (NOW) Society.

The world music of PLANT is not about learning each other’s music systems and rehearsing to create coordinated expected outcomes – it is rather, about the acceptance and co-existence of the Other. There is no ‘compromise’ in this coming together, each musician is able to be himself, with local influences undiluted and enough shared methodology to work in parallel.

and the release of the recording and publication of Gary Wildeman’s 48- page comic book graphic score Onomatopoeia.

Onomatopoeia, commissioned by the NOW Society, is a graphic score in the form of a 48-page comic book. The sonic adventures of two iconic characters as they move though onomatopoeic landscapes will be performed by the NOW ensemble: JP Carter (trumpet), Nikki Carter (saxophone), Mike Brown (bass clarinet), DB Boyko (voice), Chad MacQuarrie (electric guitar), Lisa Cay Miller (piano), James Meger (bass) and Skye Brooks (drums). During the concert, the audience members will use the comic book to follow the score and music!

The Assembly1 Festival is co-presented by the NOW Society,
the Western Front and Merge Vancouver. 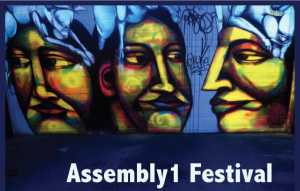