Victoria BC Ska Society is thrilled to announce the return of SAVE FERRIS from Los Angeles, California. Save Ferris will be embarking on their first North American tour since 2002 to accompany their brand new EP "Checkered Past" that hits the streets in February 2017. The New Sound Tour 2017 will touch down in Vancouver at VENUE on Granville Street just in time for St. Paddy's Day Weekend.

Joining Save Ferris will be Vancouver's The Elixxxirs. The Elixxxirs have played in and supported Vancouver's ska scene for over 15 years. Their annual ska Christmas Throwdown now 14 years running called "Xmas in Skaville" brings together local and regional bands.

To round out the bill LA's Vista Kicks will open the show.

Starting in November 2015, Save Ferris began a Pledge Music campaign to help support both their new EP and full length album. To date the campaign has had been a huge success already reaching 151% of its goal with more than 2 months until the release of their new EP. Supporters of Save Ferris' pledge campaign and those that have heard snippets of the album will enjoy the selections. Overall the songs are melodic, crisp and catchy. Credit here also must be given to John Avila of Oingo Boingo who produced it. Notably the album features two-tone ska legend Neville Staple (formerly of The Specials) and Angelo Moore of the legendary Fishbone.

Save Ferris' first shows out of the gate in 2016 have been huge successes. After headlining the Pepsi Ska Festival in Mexico City this past summer, the band recently opened a pair of shows for Gwen Stefani at the Irvine Meadows Amphitheatre. Shortly before those appearances they played at the Santa Monica Pier to over 7000 people in mid October 2016. In November 2016 they co-headline the Mari Berdanska Festival in Indonesia with Aoteorea's all Maori reggae stars - Katchafire. 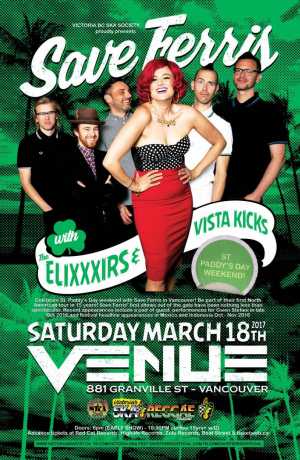