Seattle acoustic duo, The Alkis, have delivered their sound from the cobblestone streets of Pike Place Market to the rest of the West Coast; they show no signs of stopping. After meeting in high school, singer/guitarist Carly Calbero and drummer Nika Wascher, soon began to experiment and develop their sound together. Right after graduation, Calbero, headed straight for Seattle to test her skills at the famous Pike Place Market.

Over the course of five years, she was named the best busker in Seattle by Seattle Metropolitan and Seattle Weekly in addition to a top 4 finish in Rolling Stone Magazine's nationwide search for the best busker. With Nika occasionally joining Carly to entertain locals and tourists alike, it was clear that the next step in their journey would have to be made together.

In 2014 they took the leap and released, "Bright Eyed Kids EP." With their original songs as well as covers (spanning multiple genres), they started playing shows further and further from home - never losing the raw, uninhibited sound Seattle had given them. As of now, they've toured extensively in the U.S. and Canada. 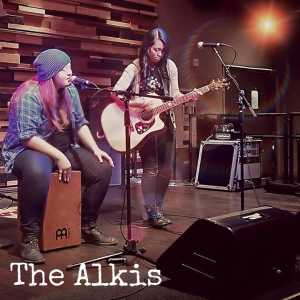