LIVE at the WISE is extremely proud to present Rae Spoon and Carole Pope for an evening of music and song featuring these two incredibly powerful and poignant artists.

Rae Spoon is an award-winning Canadian musician, songwriter, producer, multi-instrumentalist and author. They have released eight solo albums spanning folk, indie rock and electronic genres over the past twelve years and have toured across Canada and internationally. Their live shows swing between audience singalongs and large danceable arrangements, which keep them playing everywhere from folk festivals and house concerts to rock concerts and theatres. Rae was the subject and composer of the score for the National Film Board–produced musical-documentary My Prairie Home, which premiered at Sundance Film Festival in 2014. They have been nominated for two Polaris Prizes, a Lambda Literary Award, a Western Canadian Music Award, a CBC Radio 3 Bucky Award and a MOTHA Transgender Musician of the Year Award.
http://www.raespoon.com/

Carole Pope is an agent provocateur pushing the boundaries of sexuality, sexual politics, and the status quo, making you think and dance at the same time. Her work has been recognized with three Juno Awards, multiple independent music awards, a Genie Award. 4 gold, 1 platinum and 1 double platinum album. Her latest EP Music For Lesbians Squirtgun eOne explores the funny tragic things about being a lesbian.
https://carolepope.com/ 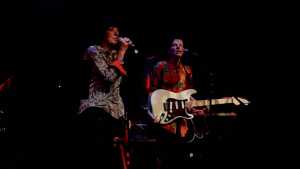