The Firehall Arts Centre is proud to produce and present Mary Vingoe’s Refuge from Saturday, March 18 to Saturday, April 1st, 2017.

Based on the award-winning CBC Radio documentary “Habtom’s Path”, Refuge tells the emotionally riveting story of Eritrean army deserter Ayinom Zerisenai who has landed in Nova Scotia, where his mother already has refugee status. But even as Ayinom’s plight wins the support of immigration lawyer Saul Ackman, questions about his past actions - and his current enigmatic behaviour – begin to haunt Pamela who has taken him under her roof. Could she and her husband be harbouring a legitimate refugee – or a terrorist?

Written by Mary Vingoe and directed by The Firehall Arts Centre’s Donna Spencer, Refuge is a provocative story of the pitfalls of seeking sanctuary in today’s suspicious world. 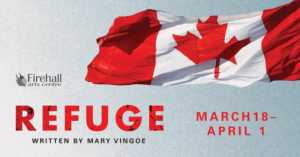