Roelf, a train driver, has spent weeks searching for the identities of a mother and child he unintentionally killed with his train on the track between Philippi and Nyanga on South Africa’s Cape Flats. After a fruitless journey through shanty towns, he encounters an old gravedigger named Simon who helps the desperate man unburden his conscience.

Based on a true story, Athol Fugard’s beautiful and haunting The Train Driver is a soulful exploration of guilt, suffering, redemption, and the powerful bonds that grow between strangers.

The Train Driver stars Pasi Gunguwo as Simon and Paul Hubert as Roelf. It is directed by Adam Henderson, with set design by John R. Taylor, lighting design and technical direction by Michael Methot, costume design by Catherine Carr, sound design by Zakk Harris, props by Linda Begg, stage management by Maria Denholme, and is produced by Linda Begg.

The Train Driver runs at the Jericho Arts Centre (1675 Discovery) from Mar 24–Apr 16, Thursday through Sunday. All performances at 8 pm except Sundays Apr 2nd and 16th, when there is a 2pm matinée (no evening performance).

Talk back session: after the show on Thurs. Mar 30th. 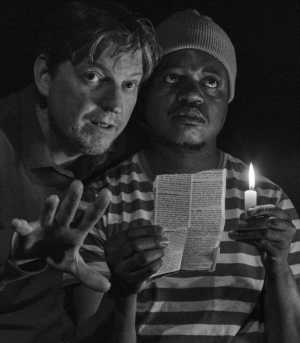