The Sidekick Players Club presents the audience favourite, Reginald Rose’s “Twelve Angry Men”. Twelve Angry Men was a 1954 teleplay by Reginald Rose for the Studio One anthology television series. Initially staged as a CBS live production on September 20, 1954, the drama was later rewritten for the stage in 1955 under the same title and again for a feature film, 12 Angry Men (1957). The play's Broadway debut came 50 years later on October 28, 2004, at the Roundabout Theatre, where it ran for 328 performances. It also won the Tony Award for Best Revival of a Play in 2005.

A nineteen year old man has just stood trial for the fatal stabbing of his father. “He doesn’t stand a chance,” mutters the guard as he leads the jurors off to deliberate. It looks like an open-and-shut case, until one of the jurors begins opening the others’ eyes to the facts. “This is a remarkable thing about democracy,” says the foreign-born juror, “that we are notified by mail to come down to this place and decide on the guilt or innocence of a man; of a man we have not known before. We have nothing to gain or lose by our verdict. We should not make it a personal thing.” But personal it does become, with each juror revealing his or her own character as the various testimonies are re-examined, the murder is re-enacted and a new murder threat is born before their eyes! Tempers get short, arguments grow heated and the jurors become 12 angry men. The final verdict and how it is reached, in tense scenes that will electrify the audience and keep them on the edge of their seats, add up to an exceptional piece of dramatic literature.

“We have a stellar group of actors bringing this jury to life,” says director Carroll Lefebvre. As usual, the cast is made-up of talent that comes from all walks of life and the Lower Mainland. Hailing from Delta, (Ladner, Tsawwassen and North Delta) Mark East, Jake Eng, Jeremy Parks, Todd-Elliot Gates, Ed Sweeney, Ray Roch, Shylo Smith, Pat Truelove and Rudy Zita. Rounding out the cast are Robert Larson and Brad Felton from Surrey and Liam Sweeney from Vancouver. The guard is the one lonely woman in the production, Bernice Fehr from Tsawwassen. 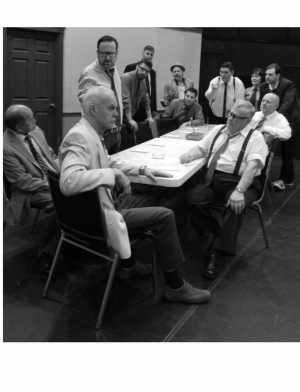