Songs For A New World by Jason Robert Brown is a rare kind of show, a song cycle that is somewhere between a musical nor a revue. It explores themes of immigration, war, motherhood, poverty, and the singular moments that transform our lives.

Fabulist Theatre is a new company in Vancouver formed by Mary Littlejohn and Damon Jang, both graduates of Capilano University’s musical theatre program. Fabulist Theatre is committed to producing shows that promote diversity in all forms and creating opportunities for a wide variety of performers, both amateur and professional. Though traditionally performed by four people, the cast has been expanded to fifteen, ranging in age from 11 - 62. Some are new to Vancouver’s theatre scene, and some are even new to Canada.

In this re-interpretation, audience members will be taken on a journey to new worlds including Syria, Afghanistan, the North Pole, the Philippines, a Shaughnessy mansion, colonial America, the Bronx, and the middle of the Pacific Ocean. Fabulist Theatre will be donating partial profits to the UNHCR (UN Refugee Agency in Canada) as well as donating tickets to new immigrants 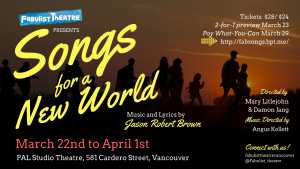