Omnis Temporalis is a multiform project based on Canadian cartoonist Seth’s critically acclaimed picture novella, George Sprott: 1894-1975. Set in the fictional Ontario city of Dominion, the work is an evocation of mid-20th century Canadiana, exploring themes such as, identity, death, change, loss and memory through various portrayals of the eponymous protagonist, George Sprott.
In 2011 Vancouver-based composer Mark Haney approached Seth for permission to use George Sprott: 1894-1975 as the basis for new work. Seth enthusiastically embraced the project and their ongoing dialogue has resulted in this collaboration. Over the course of the exhibition Haney will undertake a series of free in-gallery performances within an immersive installation designed by Seth of the television station, CKCK, where in the book Sprott hosted his local television show, Northern Hi-Lights, for over 20 years. Haney’s new composition tells Sprott’s story through dialogue and music supported by an ensemble of characters: Richard Newman as George Sprott; Dorothea Hayley as Daisy, koralee and Heather Pawsey sharing the role of narrator; Jovanni Sy as the male ensemble; Mark Takeshi McGregor on alto bass flute; Marina Hasselberg on cello; and Mark Haney on double bass. Costumes designed by Diane Park.
In addition to the CKCK TV station and performances, there will be an installation of selected images from George Sprott: 1894-1975, sketchbooks by Seth and annotated music scores by Mark Haney.
Opening Reception, April 8, 6:00pm -10:00pm
Image: Seth, from the graphic novel George Sprott: 1894-1975, 2009. 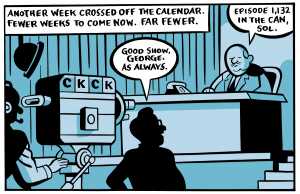