About the Speaker
Mr. Paul Maddison is High Commissioner of Canada in Australia with concurrent accreditation as High Commissioner to Nauru, Papua New Guinea, Solomon Islands, and Vanuatu. He also holds concurrent accreditation as Ambassador to the Marshall Islands, Micronesia, and Palau. He began his current assignment upon arrival in Canberra in August 2015.

Mr. Maddison served in the Canadian Armed Forces for 37 years, retiring in 2013 at the rank of Vice Admiral and from the position of Commander of the Royal Canadian Navy. 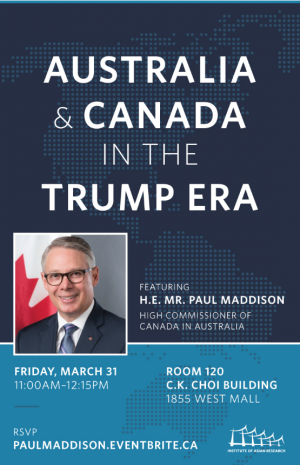