Comprised of photographs and video works by Vancouver-based artists that date from the late 1950s up to the present, Pictures From Here reflects the development of the innovative lens- based practices that emerged as a counter- point to the lyrical landscape tradition that dominated art making in this city well into the 1970s. At that time, Vancouver-based artists such as Ian Wallace, Jeff Wall and Christos Dikeakos adopted intellectually rigorous approaches to photography that both articulated an affinity with the challenges to tradition put forward by the modernist avant-garde and acknowledged the place in which they were working.

The term “photo-conceptualism” emerged out of this moment and has become intrinsically linked to the rise of Vancouver as an internationally known centre for the production of contemporary art. However, while terms like photo-conceptualism may be useful in describing approaches to photography that draw upon the critiques of the image mounted by Conceptual Art and post- modernism, they can also efface significant differences in the practices of artists whose work might be associated with the label.

Focusing on representations of the city and its surrounds, Pictures From Here acknowledges the legacy of the innovative approaches to photography developed in Vancouver, while also emphasizing the diverse range of interests and socially engaged practices that have informed lens-based art in the city over the past four decades. The exhibition is comprised of work drawn from the Vancouver Art Gallery’s Collection and from private collections, many of which have not been previously exhibited in Vancouver. 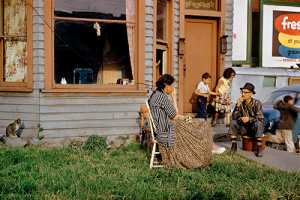