Newly formed Vancouver theatre company, Midtwenties Theatre Society, is proud to present their first offering to the Vancouver arts community, This Is Our Youth, from Friday, July 14 to Monday, July 17; Wednesday, July 19; and Friday, July 21 to Sunday, July 23 at the Red Gate Revue Stage on Granville Island.

A play by American dramatist and screenwriter, Kenneth Lonergan (Manchester by the Sea), This Is Our Youth is a brilliant, darkly humorous, bittersweet portrait of youth poised on the cusp of the scary, disillusioning path to adulthood. In Trump-era New York City, three privileged Upper West Side kids – the swaggering, drug-dealing Dennis; his dispirited, free-thinking best friend and whipping boy, Warren; and confused, self-conscious fashion student Jessica – hang out, smoke pot, scheme for cash, challenge each other, and make tentative steps towards an authentic, vulnerable connection, all in a period of less than twenty-four hours in Dennis’ apartment.

“For me, rarely is there a play that proves to be a ‘mirror’ that stands against time,” says Midtwenties Theatre Society’s Artistic Director, Beau Han Bridge. “One of these plays is Kenneth Lonergan’s This Is Our Youth. Aside from the eternally beautiful depiction of adolescence that this play portrays through its three incredibly complex characters, what drove me to debut this play is its horrifically accurate depiction of the millennial mentalities that defines our ‘politically-correct’ 2017 world.” 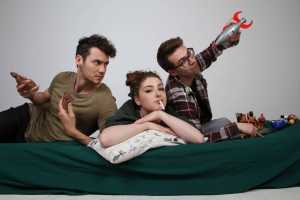