The Blues Piggies, best known for organizing the popular Doc’s Rock series from the 90’s until 2004.

They are celebrating their 25th anniversary of fundraising for Children's Wish Foundation at the Fairview Pub (898 West Broadway) on Sunday, August 27th, 4:30—7:30 pm.

The Fairview has a great dance floor, great sound and excellent food and beverage selection

They bring together various influences and have been described as Vancouver’s Rockin, Jazzin, Bluesin, and Funkin Party Band.

Lisa Dunn one of the hardest working singers in town. She sings with Hell’s Gate Blues band, Freakin Groovies, BlueMistral Trio, and The Soul City Choir. Her most recent album, critically acclaimed “Thin Line ”with the HGBB, has received air play in North America and Europe.

Jamie Dale is a veteran of the Yale who brings an amazing presence and powerful voice to any stage. 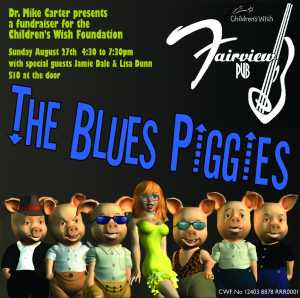