“A David Lynch Wet Dream” is a surreal exploration of unconscious fears, desires and the strange ways in which they manifest. The show premiered at the 2016 Montreal Fringe festival to both public and critical acclaim and was named as the runner up for the Mainline Creativity Award . “Lynch Wet Dream” was remounted in January of 2017 as the headliner of the Bouge D’ici dance Festival and is hitting both the Regina and Vancouver International Fringe Festivals.

A David Lynch Wet Dream is a one woman show centering around a character trying to find her place within a harsh and intangible landscape. It is a story about leaving the clutches of naivety and grappling with the ever-changing nature of identity. The piece uses the disturbing yet beautiful Lynchian world to bring its protagonist to terms with the absurdity of being alive.

The movement based theatre piece incorporates clown like play contrasted by visceral dance. Making use of projection and sound design the audience is plunged into a world of color and light and cacophonic sound. 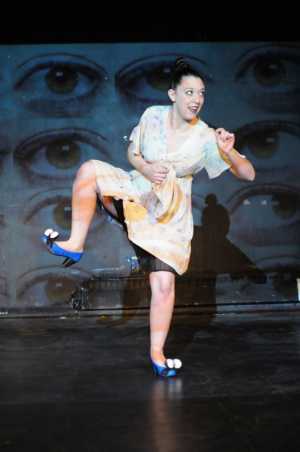