Colossal and colourful, spectacular and intimate—that’s a night at the opera as Vancouver Opera presents Giacomo Puccini’s Turandot, the opening production of the company’s exciting 2017–2018 season. To stunning effect, Puccini’s final opera combines his musical mastery with a tale as old as time. Based on Persian legend, and set in ancient Beijing (Peking), Turandot is the dramatic story of an icy princess, emotionally imprisoned by her own vengeful cruelty, who sets herself and her people free when she opens her heart to love. Among the many highlights in Turandot is Calaf’s show-stopping aria “Nessun Dorma.”

This stunning production is a creation of Quebecois director-designer duo Renaud Doucet and André Barbe. Vancouver Opera’s storytelling features lush gold’s and deep reds, with circular ornamentation symbolizing the cycle of life and death. There are dark corners and brightly lit moons. The massive collection of chorus singers, dancers, and children reinforced by VO’s own orchestra ensure the absolute grandness of Turandot.

Maestro Jacques Lacombe, last seen conducting VO’s 2014 production of Carmen, returns to interpret this lavish score, which features on of opera’s most famous arias – “Nessun dorma.” Jacques Lacombe is renowned as a “gifted and ambitious” conductor (The New York Times) whose artistic integrity and rapport with musicians and orchestras have propelled him to international stature.

Turandot is performed in Italian with English SurTitles™ projected above the stage. 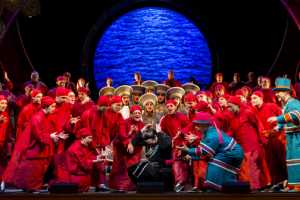