The one-man stage adaptation of the 1939 novel by George Orwell stars award-winning actor Bernard Cuffling as George Bowling, an insurance salesman who makes an escape from “Hilda and the kids” in London for a few days following a win at the races. George visits his boyhood village in an attempt to recapture childhood innocence, but finds it changed beyond recognition by the effects of modern life. His feelings of loss are intensified by the threat of war looming on the horizon.

Written by Orwell in 1938 and published in 1939, Coming Up for Air captures pre-war anxiety, tension between nostalgia and progress and deals with similar political and societal themes of Orwell’s masterwork 1984.

"Excellent...Cuffling makes George's grief over the loss of innocence match our own." - Vancouver Courier.

Like the sound of this performance? Check out the rest of our PLAY Series, featuring five captivating stories from the stage. Subscribe to the full series and save: 149/13$. Visit https://kaymeek.com/play to learn more. 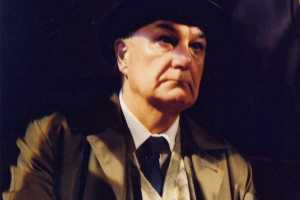