Two Strangers, Two Stories, One City, and One Fateful Night that will change both of their lives forever. Alice and Graeme are two very different people whose lives have been shaped by tragedy. Graeme is running from the memory of his missing sister, while Alice is struggling to save the life of her dying brother. Their very different paths, however, lead them both to Vegas: Sin City, The City of Lights, where anything is possible. Over the course of a night, Alice, Graeme, an illegal organ, a prostitute who might be a long lost sister, and the underground world of the homeless come crashing together in a prodigious stroke of chance. Or could it be fate? This October, witness the World Premiere of a beautifully poetic and breathtakingly visceral journey, where two people in extreme situations are forced to question the lengths to which they are willing to go in the name of love.

VIVA is an original play by Vancouver Playwright Scott Button. This world premiere is being presented as a Co-Production by Aenigma Theatre and Bright Young Theatre at the Havana on Commercial Drive. A First production of an Experimental work, VIVA is a lyrical duologue that eventually transcends its boundaries and evolves into a far more complex theatrical experience. Prepare to confront the boundaries of morality and to be forced to re-examine your societal judgements as VIVA guides you through a hyper-realistic, ontological examination of love, loss, and the human capacity for extraordinary actions, both beautiful, terrible, as well as in-between.

Buy tickets at Theatrewire.com or at the Door. 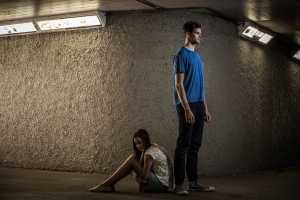