The Sidekick Players Club is pleased to present the first production of its 21st Season, Someone Who'll Watch Over Me by Frank McGuinness and directed by Carroll Lefebvre, assisted by Maureen Dorotich and Bernice Fehr.

An American doctor (Harry Pering) and an Irish journalist (David Bodor) are being held captive by terrorists in Beirut in the mid-late 1980s. They exercise and they argue, supportive in their mutual determination to survive. They are joined by an English academic, Michael (Roger Monk). The three display their national biases and prejudices, which are intensified in the cramped confines of their cell. As time passes they learn to laugh at, and with, each other, and they lament what was lost in their lives before captivity.

This is very much a play of its time but also a universal exploration of strategies of survival and a reminder that we are always stronger together, whatever the circumstances and however many cultural differences exist. These men may all speak English, but it doesn’t mean they always find it easy to understand each other. The play looks dated in a 21st century where ISIS hold so many captive – and not just westerners – and beheading is more likely than release.

What can’t be doubted is the power of a play that celebrates the instinct for survival, doesn’t shirk the possibilities of despair, and demonstrates how the power of the imagination can take the men beyond the four walls of their imprisonment, whether it’s through re-enacting the 1977 Wimbledon women’s final or serving imaginary cocktails. It’s a play that reminds us that whatever our differences, hell is not other people – it’s their absence.

“Someone Who’ll Watch Over Me” is a moving, funny and intriguing portrayal of masculinity, humour and faith.

Someone Who'll Watch Over Me runs from October 12 to 28, Thursday, Friday and Saturday evenings at 8:00pm and matinees on Sunday, October 15 and 22 at 2:00pm. All performances at The Tsawwassen Arts Centre. To reserve please call 604-288-2415. There is limited seating, so reserving early is recommended. Language Warning. 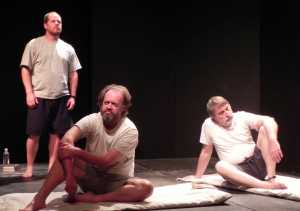