Join the Vancouver Magic Circle as they celebrates their 75th Anniversary with a magic show featuring the finest magicians from around the world. You've seen these magical artists on shows like America's Got Talent, TEDx talk, The Magic Castle in Hollywood and even Penn & Teller's Fool Us. Featuring:

Jeki and his magic have wowed audiences in England, France, Sweden, Italy, Japan, China, and many other countries including Scotland where, as a member of SNAP, one of Korea’s biggest magic shows, he was invited to perform at the famed Edinburgh Festival. As seen on America's Got Talent, He has won awards for several magic organizations such as The International Brotherhood of Magicians, and The Busan International Magic Festival. Come see why Jeki was crowned the "Cutest Magician of All Time" by AGT!

The Hannibal experience takes you to that brink between verisimilitude and verity. He is an extremely adept magician, a performer with an intuition for how your mind works and how to keep you on the edge of your seat, wondering: Was that Real? Hannibal has delivered cutting-edge entertainment for audiences around the world. Hannibal was recognized by the International Brotherhood of Magicians with the People’s Choice Award for Close-Up Magic. Come see why Hannibal is THE "Magic Man" of North Carolina!

His skill and style have mesmerized audiences from Hollywood to the Far East, and all points in between. Andrew has received accolades from the prestigious Academy of Magical Arts. Having been voted the Academy's' "Parlour Magician of the Year" in 2009 & 2010. Come see why Andrew has the "Golden Hands" of Magic. 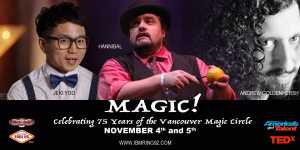