Just prior to speeches at the official opening of Coquitlam Silvercity VIP Cinemas on April 19, Cineplex vice-president of communications and investor relations jokingly acknowledged her B.C. audience by saying "Oh yeah, go Canucks!"

"This could actually be a whole drawn out conversation," she added, "because I'm actually from Winnipeg originally." (When someone yelled out "Go Jets!", Marshall enthusiastically replied "Exactly!")

Cineplex CEO Ellis Jacob made a more serious note of Canadian pride when he talked about how he has witnessed the growth of domestic companies in our national movie exhibition industry.

"When I got into the business initially, this business was pretty much 90 to 95 percent owned by U.S. large multinationals," he said. "And today, what makes me most proud is the fact that today this business is owned 95 percent by Canadians, all of the different circuits, including Cineplex, Empire, Landmark. So I think that's a major change and shift as far as the entertainment industry goes…."

"Traditionally, we hold these events before we open a new project to the public," Marshall said. "Tonight, we're doing things a little differently because our VIP Cinemas opened just a few days before Christmas last year, and as these are the first VIP Cinemas to open in B.C., we couldn't let that occasion go by unnoticed so we decided to delay our celebration until now."

Marshall explained that the building has been undergoing numerous changes, including being repainted and replacing all seats in all of the auditoriums (to be completed by May).

Jacob went into further detail about the improvements. "Over the past several months, we've spent almost $3-million dollars renovating the theatre by adding a new lobby, concessions, Out Takes [food service ], Poptopia [gourmet popcorn], box office, and Xscape entertainment centre [offering interactive video games], in addition to the jewel of the crown, our VIP Cinemas."

The adult-only VIP Cinema auditoriums offer high-back leather rocker seats with retractable trays (arranged in pairs to allow couples to cozy up to one another), ample leg room (wide enough to allow patrons to walk past seated patrons without disturbing them). Seats are reservable online. 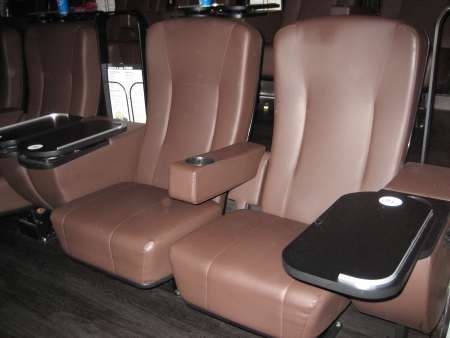 Reclining loungers (shown below) are available only in the front row. 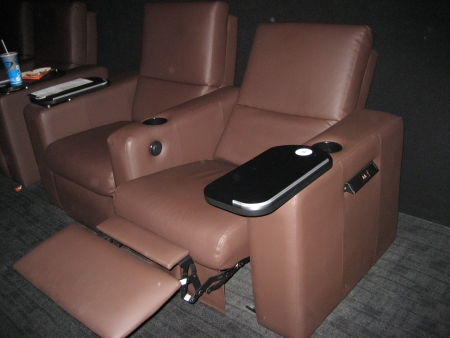 In-seat food and beverage service can be ordered from a menu which ranges from traditional movie-theatre fare like fountain drinks, popcorn, and candy to more sophisticated offerings such as mocktails, appetizers like edamame and deep-fried pickles, meal items such as wraps and flatbread pizza, and more. 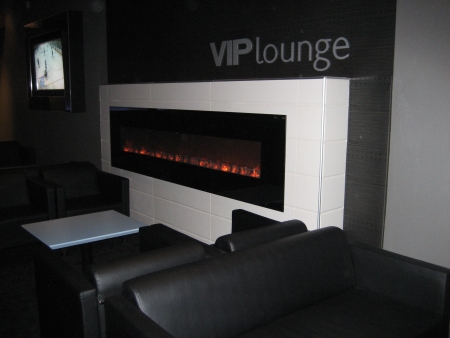 The stylish VIP Lounge (above) includes flatscreen TVs, a fireplace, and a bar (below). 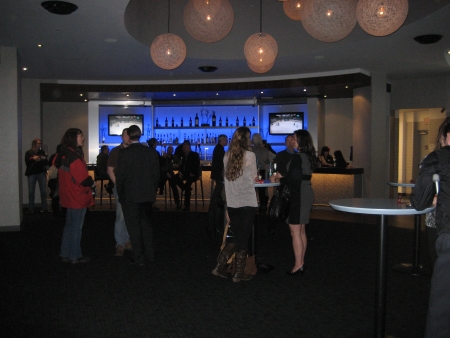 Jacob noted that B.C. Minister of Energy and Mines Rich Coleman announced changes to the B.C. liquor law on April 11 that will allow movie theatres to apply for licences to serve alcohol during screenings.

"We applaud this announcement, and thank the minister, [Coquitlam-Burke Mountain] MLA Doug Horne, and all the hardworking staff at the Liquor Control Board of British Columbia for their support and forward thinking," he said. "We have already started the application process for a liquor licence for our VIP auditoriums in order that we may serve liquor in these theatres."

Jacob added that they plan to open more VIP Cinemas in "select locations" across Canada, and already announced plans for High Street in Abbotsford and Marine Gateway in Vancouver.

Jacob, the Tri-Cities mayors, with SilverCity Coquitlam general manager Kevin Isaac, all participated in the ribbon cutting to officially open the theatre.

my wife and i enjoyed seeing a movie in the VIP cinemas but we (she) had only one complaint. the VIP bathrooms are unisex. i doubt its much fun for a woman expecting a nice, private bathroom to walk in and see urine all over the toilet. I, on the other hand dont really care . it would be nice if the washrooms nearest the lobby were for the ladies(courtesy) and the other half for men. other than that i hope SIlvercity Coquitlam sees a boost in sales as a result.

Amazing we finally got these here, as amazing it is how far behind we are in regards to things like this in comparison to other countries. VIP cinemas have been available in Mexico for at least 5-7 years for example. Anyhow... Happy we finally got them... :)

It's interesting. But it just seems to be theaters making more of an effort to get greater dollar revenue when audiences seem to be deserting theaters in droves.

With theaters already bilking us over-inflated prices to see films in gimmicks like 3D, movie-going is becoming something that is prohibitively expensive for the average filmgoer. Who wants to pay even more for luxury gimmicks?

Why can't theater chains do a little more in terms of customer service to make sure that the average moviegoer enjoys their experience better such as policing people who are determined to ruin everybody's viewing experience by talking or continually switching on cellphones? A little more of this, which would cost nothing, would stop some people (like me who loves movies) abandoning theaters for home entertainment and downloads rather than attempting to get us back in the door with dubious luxury gimmicks.

If Hollywood made better movies we wouldn't need any of this crap.

Suns out, long weekend coming up. But I get such a twisting feeling in my chest. No plans, no...

You sat across the aisle and helped me pick things up BC my baby was all over the place. You...