The Hollywood Foreign Press Association celebrated the 79th annual Golden Globes on January 9. If you weren’t on Twitter, you might not have noticed.

That’s because NBC did not broadcast the affair, the network having distanced itself from the HFPA last year due to twin controversies over the organization’s lack of diversity and blurry ethical standards. The HFPA has said it’s moved to address both issues, but since the organization doesn’t disclose its member list or discuss its internal actions it’s unclear exactly what has or hasn’t been done.

Retreating even further into its self-protective shell, the HFPA decided not to live-stream the awards ceremony at all, declaring the evening a “private event” and rolling out the winners on social media. And that’s when it got fun.

In what was either a fascinating exercise in existential nihilism or a desperate attempt to change the conversation from systemic racism and corruption to garden-variety incompetence, whoever was running the Golden Globes social media account spent the evening announcing the awards in an almost incomprehensible fashion: plugging serious-minded projects like The Power Of The Dog, Mare Of Easttown and West Side Story into generic, pre-written tweets about the glory of the movies… or whatever.

Here are some examples:

Wait, what? "Lean On Me" isn’t from West Side Story. It isn’t even from the same era. (NOW’s Glenn Sumi suggests it’s because DeBose is playing a supporting role, which I suppose makes sense. Look who got a full night’s sleep.) 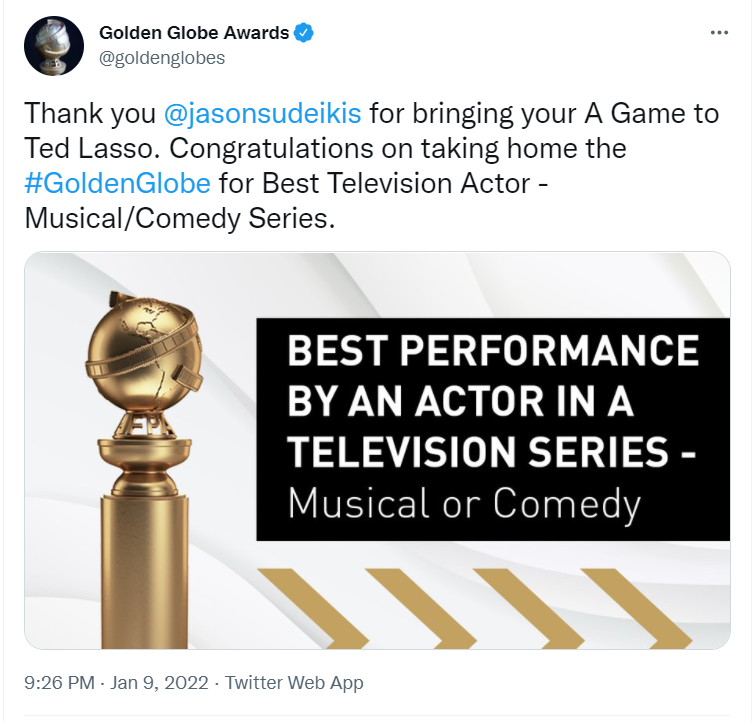 Well, bringing one’s A game is a sports reference, and Ted Lasso is about sports. It’s awkward but fine. 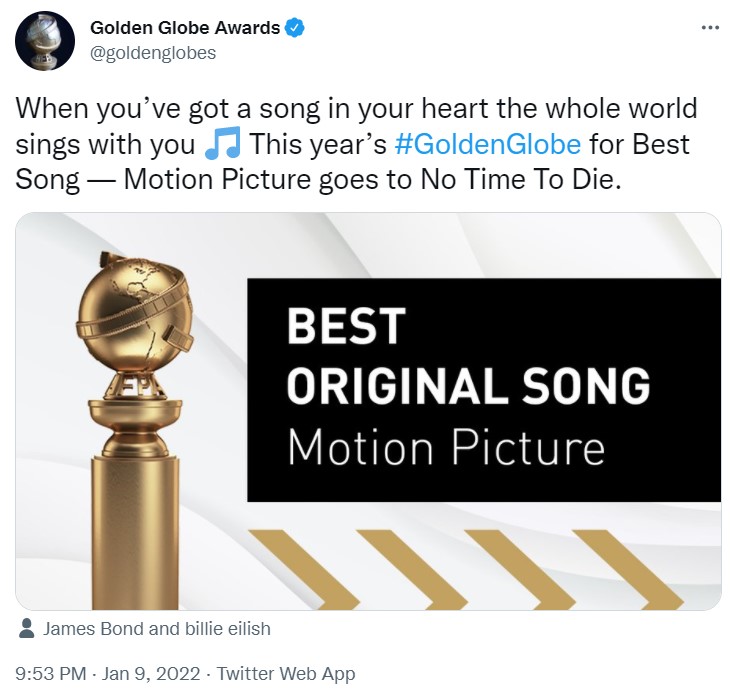 Did they even listen to the song? 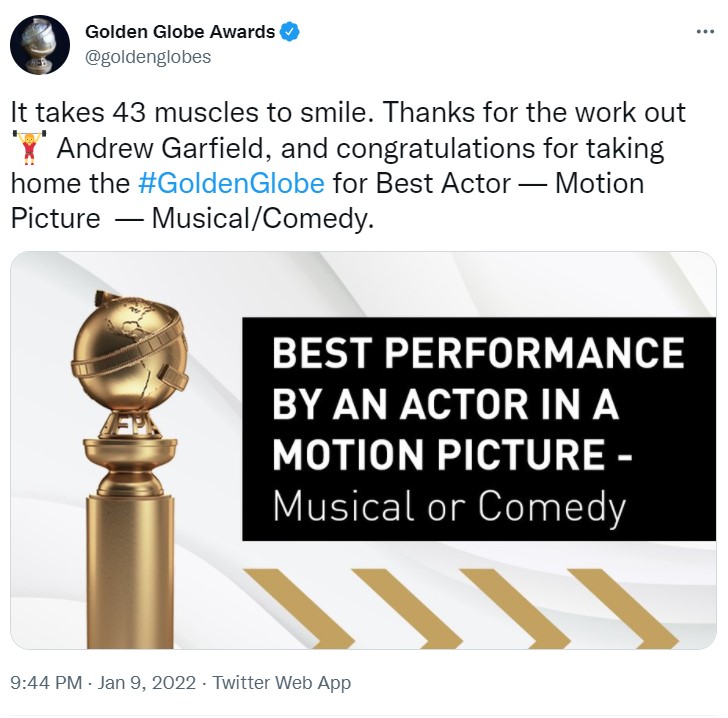 This feels like they tried to be specific—Garfield plays Jonathan Larson, who wrote Rent, which has a song with a lot of numbers in it—but overthought the joke. 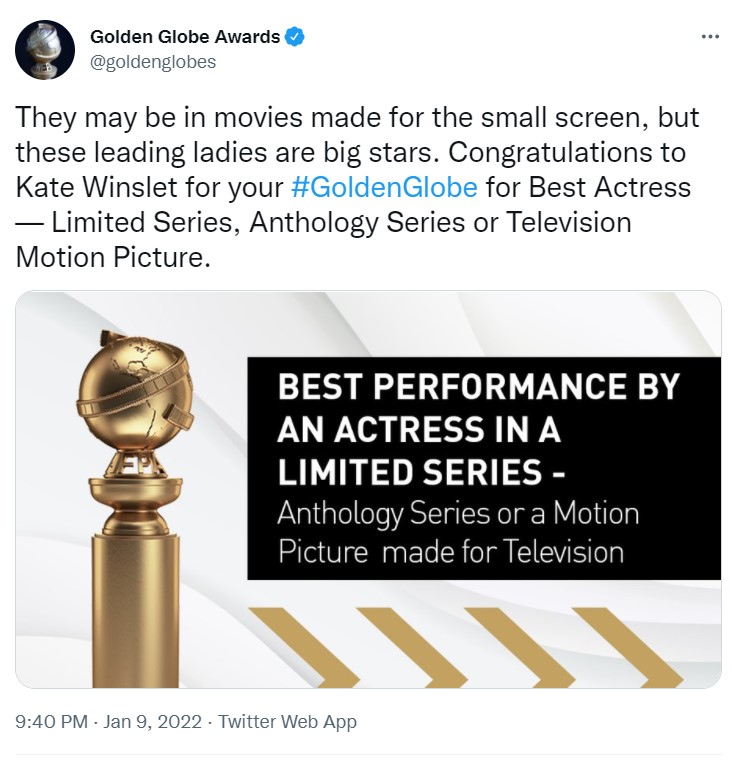 I have no idea what this means. 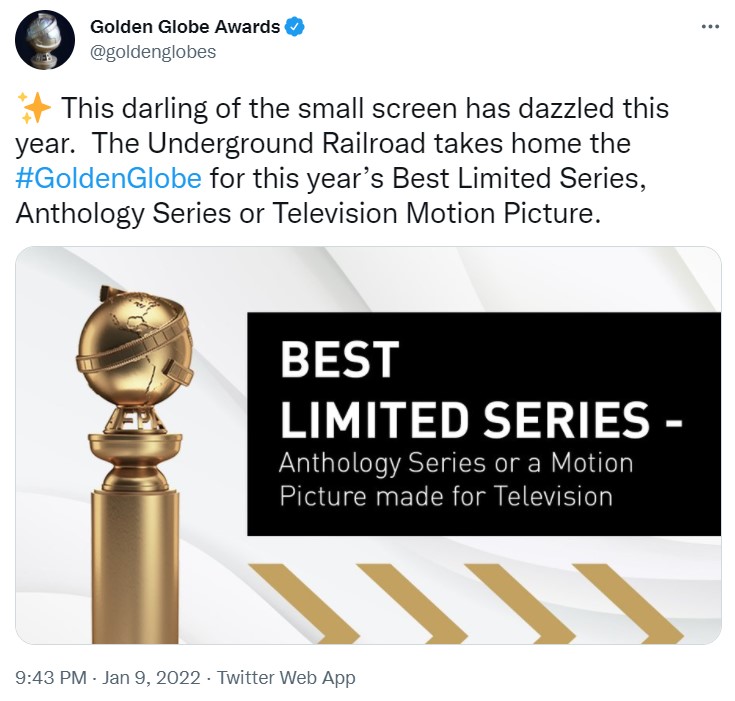 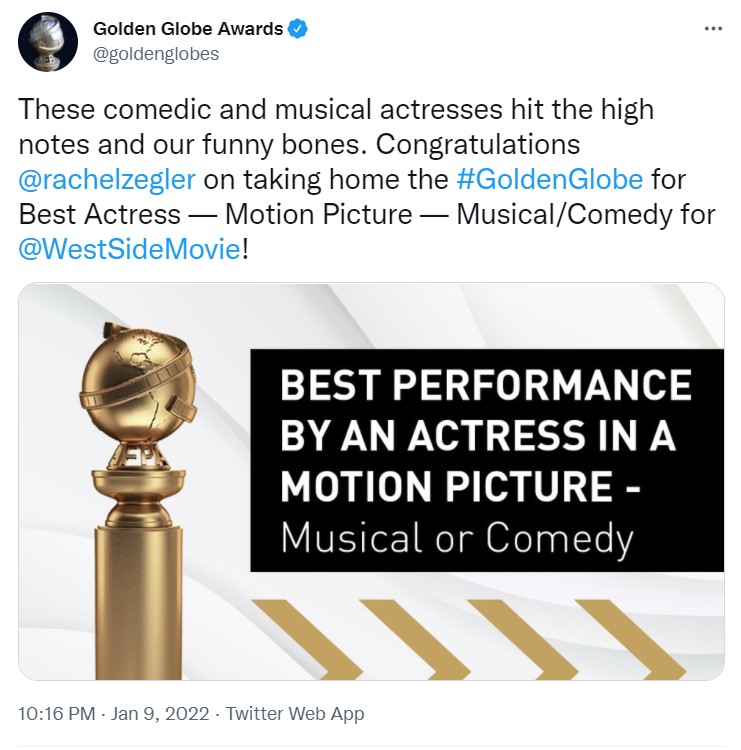 Again, not really appropriate to the performance or the movie. 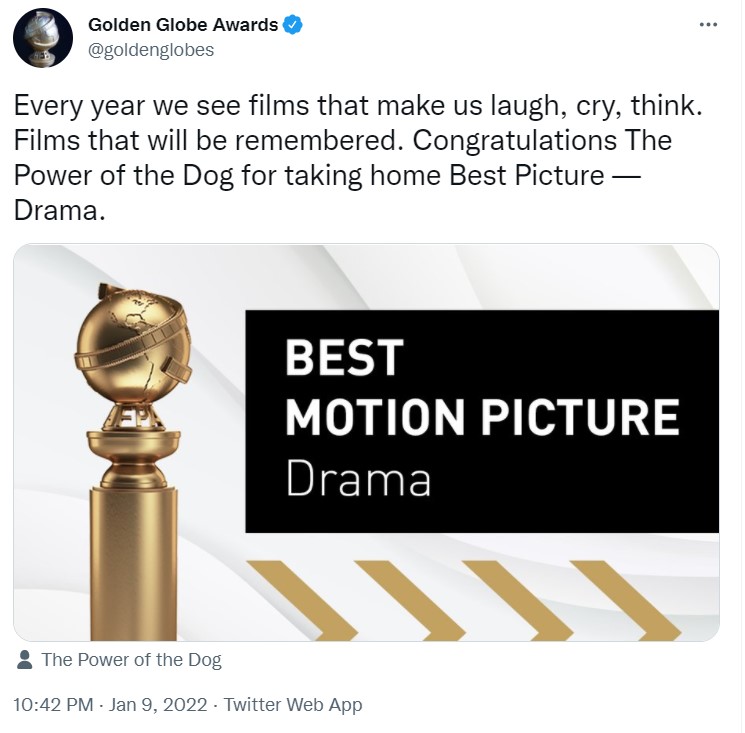 “This particular film was steeped in despair and repression, its characters trapped in their own misery. But anyhow.” 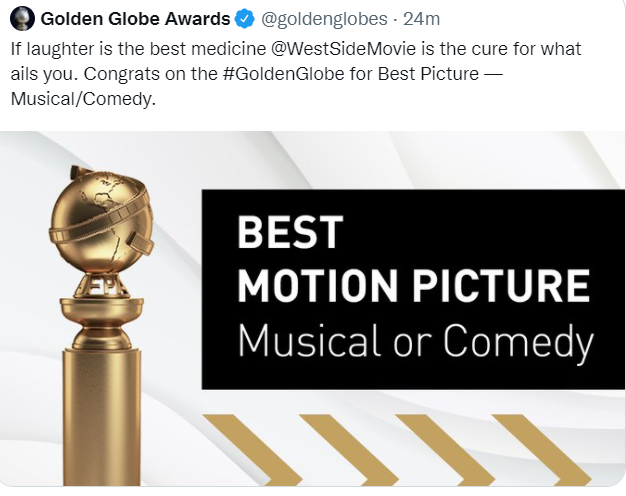 Twitter was not kind. (I admit it, I was part of the pile-on and I regret nothing.) So the HFPA deleted the tweet and replaced it… with this: 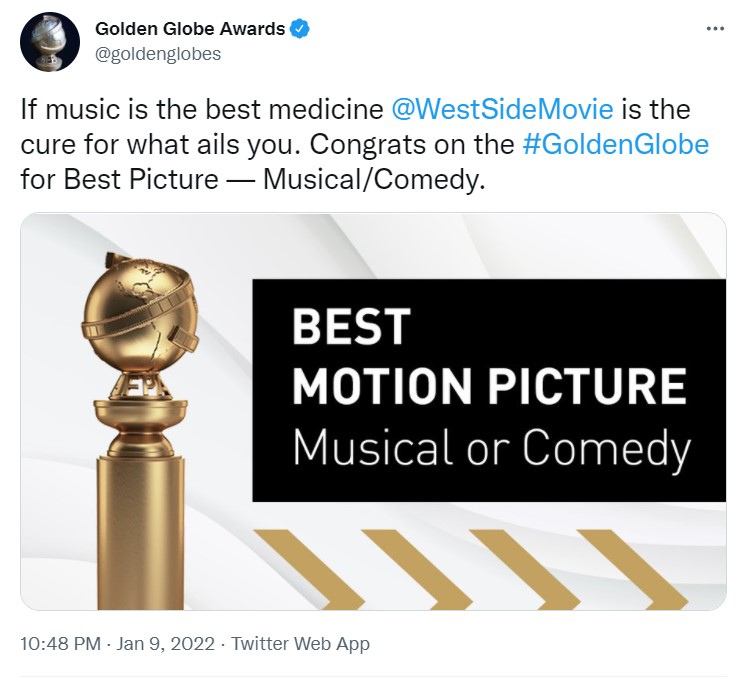 I mean, factually, it’s better. West Side Story is a musical. And we all know the old saying about music… being the best medicine…

Look, I could dunk on the HFPA all day, and on some level I suppose I should be happy this foolishness provided a distraction on a cold January evening. But on another level, it reflects on the slapdash nature of the organization, which for a very long time has ridden a wave of authority and status it simply doesn’t deserve just because it throws big parties and gives awards to famous people.

And the worst thing about it? This year, those awards were pretty respectable! Jane Campion won best director for The Power Of The Dog; Will Smith won best actor (drama) for King Richard; Rachel Zegler and Ariana DeBose won lead and supporting actress prizes (musical or comedy) for West Side Story.

There’s always one what-the-hell win; this year, it was Nicole Kidman winning best actress (drama) for her interpretation of Lucille Ball as an opinionated extraterrestrial in Aaron Sorkin’s Being The Ricardos.

Any one of those moments could have made for a memorable speech at an ordinary ceremony, especially given the Globes’ famous open-bar policy, but now we’ll have to settle for morning-after statements and press releases, dulling the potentially historic impact of these prizes. All anyone will remember about this year’s Globes are the inept tweets.

On the upside, maybe Ryan Reynolds will make fun of them in an ad for his gin label and turn the whole thing around. He’s pretty good at that stuff.

Breathe in and out

I went off weed edibles for a month so that I could clear my head. Now, I’m back on just to see...

You wear glasses and sometimes a toque, and i think you wear either a green or yellow jacket...