Featuring over 55 impressive paintings and sculptures, Takashi Murakami: The Octopus Eats Its Own Leg offers an in-depth survey of the evolution of Murakami’s paintings from the 1980s to the present, while highlighting the artist’s role as a committed and often conflicted cultural commentator. Spanning three decades from his earliest mature work to his recent large-scale creations, this extraordinary exhibition will include a recently produced five-metre tall sculpture and two specially created multi-panel paintings.

For Murakami, connecting with his audience and allowing his artwork to be accessible to the general public are integral aspects of what he stands for as an artist. Murakami has created a new major public art project featuring a skull surrounded by octopus tentacles which will cover the Gallery’s Georgia Street façade, extending the exhibition outside the traditional confines of the Gallery space.

“We are delighted to offer Canadian audiences the opportunity to experience a wide range of paintings and sculptures by one of the world’s most influential and visionary artists,” says Kathleen S. Bartels, director of the Vancouver Art Gallery. “In tracing Takashi Murakami’s development as an artist over the course of three decades, The Octopus Eats Its Own Leg draws attention to some of the major themes and cultural conditions that have shaped his artistic practice. We can’t wait to welcome countless visitors from Vancouver and beyond to this monumental exhibition, and for the general public to experience his work every time they pass by our Georgia Street facade.”

The exhibition opens with Murakami’s early paintings from the 1980s that synthesize traditional Nihonga-style painting techniques and formats with contemporary subject matter, and goes on to trace the artist’s shift in the 1990s toward a distinctive, anime-influenced style known as Superflat. From his signature animated flowers to the iconic character Mr. DOB, a mouse-like figure that serves as part ambassador and part self-portrait, the works in the show offer an in-depth look at Murakami’s unique Superflat universe.

The exhibition also features works from a recent body of paintings depicting groups of wizened Buddhist monks (Arhats), including the ten-panel 100 Arhats (2013), an ambitious work of stunning intricacy and craftsmanship. A departure from the commercial pop aesthetic that first garnered him popular acclaim, the Arhat works mark Murakami’s return to his training in traditional Japanese painting in order to find a response to the suffering caused by the massive earthquake and tsunami in Fukushima, Japan in 2011 that killed more than 15,000 people.

“The Octopus Eats Its Own Leg highlights Takashi Murakami’s dedication to exquisite craftsmanship as well as his boundless imagination moving freely within an ever-expanding field of aesthetic decisions and cultural inspiration, from Buddhist folk traditions to art history to popular culture,” says Bruce Grenville, senior curator. “This wide-ranging exhibition offers a serious engagement on issues affecting Japan and the larger world today, from media culture to globalization to the threats of nuclear power.”

Takashi Murakami: The Octopus Eats Its Own Leg is organized by the Museum of Contemporary Art Chicago and is curated by MCA Chief Curator Michael Darling. 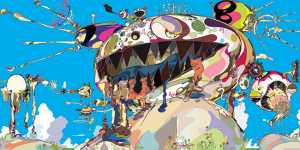