Fourteen years have passed since Christine Tassan et les Imposteures started tending their craft in the gypsy jazz milieu and performing standards, and there is no doubt that they are definitely here to stay. Pioneers in a domain usually reserved for men and precursors of the gypsy wave that swept across Québec, this all-woman quartet continues to reinvent this timeless music while integrating new ideas and influences with an originality and flair we have become familiar with. From standards to original compositions, the Imposteures’ musical arrangements innovate, rejuvenate and leave room for unbridled creativity from four talented and accomplished young women.

Since the group's inception in 2003 they have solidified their reputation with more than 400 concerts in various venues and festivals, including numerous appearances in major events and tours across Canada and France. They have performed at the Montreal International Jazz Festival, the Lévis Festival de Jazz, the Festival des guitares in Rouyn-Noranda, April in Paris in Vancouver, and in St-Pierre et Miquelon. Over the years, the band has shared the stage with illustrious gypsy swing musicians, including John Jorgenson, Tchavolo Schmit, Angelo Debarre, Rodolphe Raffalli and David Reindhart.

In June 2014, they had the great pleasure to be invited to the Django Reinhardt Festival of Samois-sur-Seine (France), one of the most prestigious gypsy jazz festivals anywhere, which takes place in the town where the great manouche guitarist lived his last years. In front of more than 2000 enthusiastic people, they stood out with their “finesse” and “joie de vivre” as the very first women and furthermore Québécois gypsy jazz band to perform on this famous stage!

Their first two albums, De bon matin (2007) and Pas manouche, c’est louche (2010), achieved rapid critical acclaim. Only a few weeks after it was released, De bon matin went to the top of Radio-Canada’s Coup de Coeur hit list and reached number one on the Radio Couleur Jazz top 4. In turn, Pas manouche, c’est louche was nominated for Best Jazz Album Creation at the ADISQ awards, alongside other great artists such as Jordan Officer, Julie Lamontagne and Christine Jensen.

On stage, we bear witness to four musicians who have mastered their talents. They improvise with ease, interpret their repertoire with dynamism, and blend their voices together in refined harmonies. But it’s their communicative energy and the personal bond between them that hits home the most. Christine Tassan et les Imposteures, are first and foremost four friends who have harnessed their energies and their voices to give rise to, year after year, the fruit of their creativity.

Their third album, released in 2012 and a finalist at the Opus Prize 2014 in the “Jazz album of the year” category, follows in the same lively spirit. Like its two predecessors, it weaves together a clever mix of original compositions and standards, songs and instrumental pieces. The album brims with a ripe confidence that clearly reveals the evolution of the group.

In April 2016 the band released the fourth album Entre Félix et Django, a double tribute to those two great artists, Félix Leclerc and Django Reinhardt. This ambitious and exciting project marks the beginning of a new chapter for Christine Tassan et les Imposteures, who are once again touring Québec, British Columbia, Canada and the world to showcase their new album. 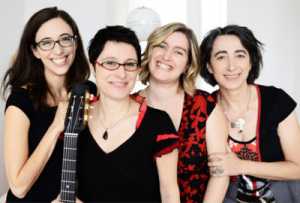